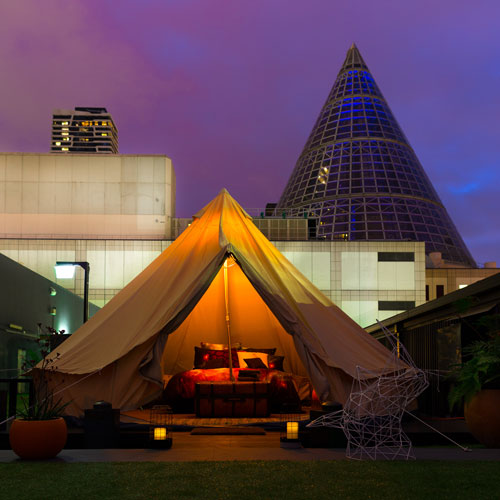 The flourishing pop-up trend is attracting visitors to Melbourne, offering a different way to appreciate the city’s cosmopolitan culture Yet, despite being “really well received” according to owner Jerome Borazio (co-founder of St Jerome’s Laneway Festival), it will not be around for long. Originally slated to open for six months, Borazio and his team are hoping to extend its lease to take advantage of the summer months.

St Jerome’s – The Hotel epitomises the pop-up culture that Melbourne has embraced over the last few years, transforming the city into an experiential playground. “I think overall, pop-up has a reputation for providing great services and experiences,” said Borazio.

Tourism Victoria is actively promoting the city’s burgeoning pop-up culture. Pop-up was also a major theme at the recent Insights@Melbourne media event held as part of the Australian Tourism Exchange in Melbourne in June.

Tourism Victoria’s chief executive, Leigh Harry, said that Melbourne’s hidden and unexpected experiences such as its laneways and hole-in-the-wall cafés have long been a signature of the city. “For international visitors, uncovering these hidden gems adds to their appreciation of Melbourne’s culture and enables them to rub shoulders with locals,” he said.

A guest speaker at Insights@Melbourne was Bec McHenry, the chief executive of The Space Agency, a local company specialising in activating vacant or under-utilised spaces. She said that in order for Melbourne to remain relevant and retain its title as the World’s Most Liveable City, it needs to stay ahead of the curve and pop-ups help to achieve that.

McHenry and her team are in the early stages of utilising pop-ups to re-energise popular tourist destinations like St Kilda’s Fitzroy Street and Acland Street, which over time, have become tired.

“We are working with a number of local stakeholders to help activate Fitzroy Street and bring commercial density back to the area,” she said. “We see great opportunities for businesses, both existing and newcomers. I don’t think we will recognise Fitzroy Street in two years’ time.”

This article was first published in TTG Asia, September 18, 2015 issue, on page 20. To read more, please view our digital edition or click here to subscribe.