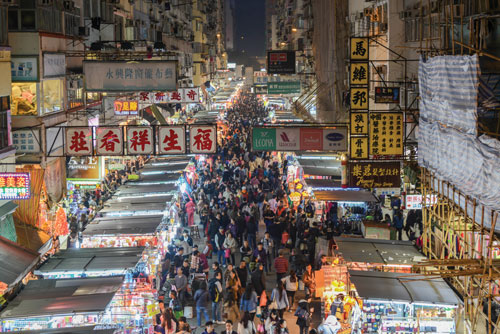 Since the implementation of the Individual Visit Scheme (IVS), which allows residents of selected Chinese cities to make non-group trips to Hong Kong, the percentage of Chinese visitors to overall arrivals increased from about 50 per cent in 2003 to nearly 75 per cent in 2013. In absolute numbers, the figure leapt from 8,470,000 to 40,745,000.

At Hong Kong’s size, this has exerted pressure on border checkpoints, the public transport network and tourist attractions. Dubbed ‘locusts’ by disgruntled locals, tensions further escalated earlier this year when Chinese visitors were openly harassed as street protests were being staged.

Even though the retail sector has enjoyed an average of 10 per cent annual growth in business volume, rising rental fees due to luxury outlets and pharmacy stores sprouting up has squeezed small businesses.

Representing the wholesale and retail constituency, Hong Kong’s Legislative Council member, Vincent Fang, said: “Small shops can’t compete with them…In fact, the government has opened the gate to mainlanders for more than a decade but nothing has been done to facilitate this with infrastructure. Therefore, we now suffer from it.

Last December, the government completed an assessment report on Hong Kong’s capacity to receive tourists, projecting annual visitor arrivals will increase from 54 million in 2013 to 100 million in 2023.

Secretary for commerce and economic development, Gregory So, noted that Hong Kong would generally be able to cope with the demand of visitors up to 2017, but the supply of hotel rooms would continue to be tight.

Hong Kong Hotels Association executive director, James Lu, said: “Visitors from mainland China bring immense economic benefits to Hong Kong, and the city has the capacity to handle more visitors…but we also need to plan for our future by continuing to expand our capacity to meet anticipated visitor growth in the future.”

For its part, the government is generating more land for hotel projects through various measures, including opening up industrial buildings for redevelopment. Some 14 applications have been granted approval as of end-June 2013, which is expected to result in the provision of some 3,000 rooms. New supply will also come online over the next few years, when Hong Kong Disneyland Resort and Ocean Park add hotels to their premises.

To address public concerns, the authorities have also agreed not to increase the number of Chinese cities under the IVS or expand the scope of the multiple-entry permit. In addition, passenger frequencies on MTR lines have been improved and five new railway projects are expected to come into operation between end-2014 and 2020, one of which will allow visitors to directly access Ocean Park.

Travel agencies said they do not wish to see a cap on the number of Chinese visitors to Hong Kong, but offered suggestions on how the situation can be better managed.

“We can’t turn away Chinese travellers which are a key source of market. What the government needs to do is to divert the busy downtown tourist traffic to other areas. Lantau is an option as the Hong Kong-Zhuhai-Macao Bridge connects to the island, which favours new business districts and outlet stores,” said Hong Kong Association of Travel Agents chairman, Jason Shum, who fears a chain reaction from the Chinese government to stem traffic flow to Hong Kong if tensions persist.

Gray Line Tours managing director, Michael Wu, said: “(Lantau) should be positioned as a destination that complements its existing tourism infrastructure, i.e. outlet malls, green tourism, cycling paths and possibly even a water park. It has to have local specialties.”

Legislative Council member Fang added: “Lantau has definite potential for development, and retailers can promote local handicrafts like Chinese brushes and paper cutting that are hard to find in town.”

While the birth of the Lantau Development Advisory Committee in February is a timely gesture, the capacity problem must also be tackled in other ways, said interviewees.

Hong Kong Association of Registered Tour Co-ordinators chairman, Wing Wong, said: “This new tourism centre on Lantau will help alleviate the congestion. However, I doubt we can bank on it as it appeals to only a certain type of tourists, i.e. (those who like) greenery and outlet shopping.”

He opined that the government has to improve the facilities for coach parking downtown, while theme parks need to develop an effective system to inform tour operators when the park is full.

“Ocean Park was fully packed (during) Chinese New Year, and for the first time, it suspended the sale of tickets on site. Unfortunately, some of our clients could not get in,” said Wing.

In the longer term, Fang felt it would be better to create a shopping area near the border such as in Lok Ma Chau. He explained: “(It should not be) skyscraper buildings but a marketplace for local goods in order to divert traffic here. We inspected the site with the government and hope that this idea will materialise in two to three years’ time.”

Meanwhile, Wu said that since it would take a long time before any new infrastructure would be ready, existing international events, such as Hong Kong Sevens and Hong Kong Wine & Dine Festival, should be promoted so that tourists attracted are of higher quality.