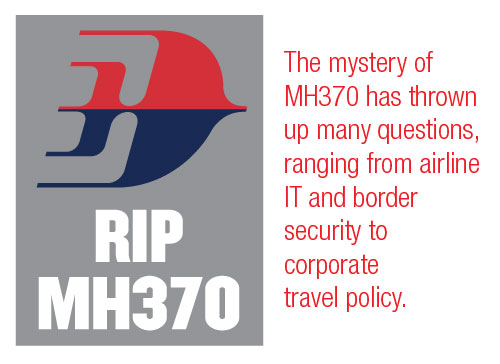 As I write this, it is assumed that Malaysia Airlines’ (MAS) missing plane has gone down in the southern Indian ocean. However, traces of the jet have yet to be found, and the why and how linger after two long weeks.

While the hunt has been described as searching for a needle in a haystack, the Boeing 777-200ER is, after all, a modern flying machine measuring some 64m in length and 61m in wingspan.

I’m no aviation expert, but it’s baffling that in this day and age we can locate our mobile phones with the help of an app but not a plane outfitted with advanced technology.

Clearly I’m not the only one scratching my head over this. Airline chiefs have been reported as sharing the same surprise.

The mystery of MH370 has thrown up many questions, ranging from airline IT and border security to corporate travel policy.

1. Will this cause airlines to relook their systems? In a Bloomberg report, IATA CEO, Tony Tyler, said this incident should prompt the industry to examine the introduction of real-time data transmission so that aircraft can be continually tracked. There have also been calls to upload black box data to the cloud. While it’s great that airlines have been looking at ways to cater to consumers’ connectivity needs in the cabins, it seems they also urgently need to plug technology gaps in the cockpit.

2. Will employers emphasise duty of care and ensure stricter policy compliance? The potential loss of 20 key Freescale Semiconductor employees onboard has made corporate travel managers sit up, with many vowing to review their own booking processes. At TTG Asia Media, we too took immediate action to ensure teams were split up while travelling to Shanghai for the upcoming IT&CM China. While inconvenient, such a step was necessary to mitigate risks.

3. Will security be tightened to eliminate immigration loopholes? If not for the investigation into the plane’s disappearance, the two Iranians travelling on stolen passports might have never been discovered. More worrying is that Interpol confirmed that both passports were added to their database after their theft in Thailand, but no checks were made by any country.

ASEAN has been moving towards the breaking down of national boundaries for freer movement of manpower, tourists, etc within the 10-member bloc (see page 2). Are we able to trust each other’s border controls to weed out unwanted intruders?

4. What will it take for Malaysia and MAS to recover from this disaster? This was supposed to be Visit Malaysia Year, and hopes were high that the campaign would be able to deliver 28 million tourist arrivals, up from 25.7 million in 2013 and 25 million in 2012.

With two-thirds of the passengers on MH370 being Chinese, the way the crisis has been handled has incensed China, which is currently the third-largest market for Malaysia.

As for the struggling flag carrier, it had recently reported its fourth straight quarterly loss in the last three months of 2013, bleeding RM1.2 billion (US$355 million) in 2013, almost thrice what it suffered the previous year. Just this week, one of its jets also had to make an emergency landing.

It’s going to take a well-thought-out disaster recovery plan to get travellers excited about the destination and airline again once this blows over.

For now, I am joining all others in praying that MH370 will be found. And hopefully, the lessons from this tragedy will be taken to heart so that all that has happened would not have been in vain.