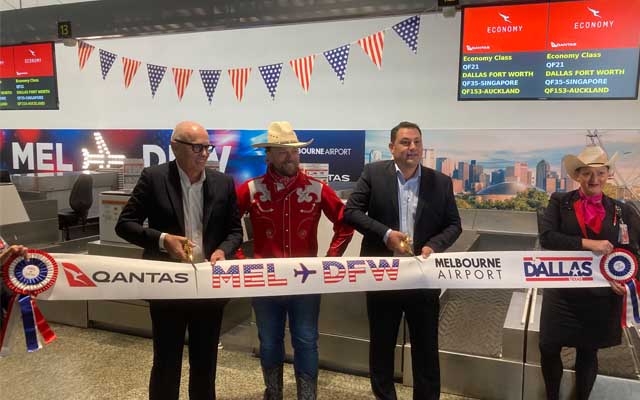 Qantas has added a non-stop service between Australia and the US, which the airline indicated is the world’s fourth longest flight.

The Melbourne-Dallas/Fort Worth service will initially operate three times weekly in each direction.

The outbound flight from Melbourne is scheduled to take 15.45 hours but it is the return that sends this route up the rankings with a flight time of 17.35 hours. The world’s longest flight is Singapore Airlines (SIA) New York-Singapore at 18.50 hours, followed by SIA’s Newark-Singapore at 18.45.

“Dallas is a hub for our biggest partner in the US, American Airlines, so we can connect via Dallas to more than 200 destinations across the US and to the Caribbean and Latin America,” he said. “We also see enormous opportunities for the American tourism market to come to Australia.”

Flights are timed to maximise connections at both ends of the route with a lunchtime arrival in Dallas and an early morning touchdown in Melbourne. For those looking to venture outside of Melbourne, Qantas and its low-cost subsidiary, Jetstar, offer seamless connections to Australia’s most extensive domestic network.

The Dreamliner carries 236 passengers, with 42 in business, 28 in premium economy and 166 in economy. Thompson told TTG Asia that due to the long distances Qantas operates, it has more premium seats on its 787s than most other airlines.

“We’re very conscious of the need for space and comfort so our weighting for premium classes is far greater than a lot of other carriers,” he added. “The 787-9 is absolutely the perfect aircraft for a Dallas-Melbourne or Sydney route.”