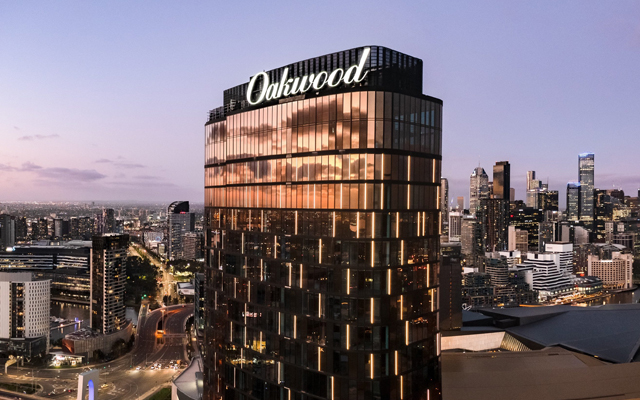 Ascott’s acquisition of Oakwood came as no surprise. Their parents, CapitaLand Investments and Mapletree Investments respectively, are linked to Singapore’s Temasek Holdings. If anything, it is long time coming.

“It’s been so long in not happening, I assumed it wasn’t going to happen,” said Robert Hecker, managing director Pacific Asia, Horwath.

The bigger surprise is how the extended stay market has become the darling accommodation model of Covid-19, proving its resilience, flexibility and cost-efficiency in hospitality’s worst crisis ever. New segments such as co-living and serviced condominium units have also mushroomed in Asia, although serviced apartments remain the core product.

Completed in July, the merger is widely seen as a timely realignment or reorganisation of two family members to harness synergies and seize further growth in what is clearly a solid sector.

Mapletree is understood to be focusing on students lodging henceforth, a segment in which it has a bigger scale than Ascott.

“We will share a new target in due course,” said Kevin Goh, CapitaLand Investment CEO for Lodging, in an interview.

This does not necessarily mean the company will do more acquisitions which, since 2017, have included Australia’s Quest Apartment Hotels, Synergy Global Housing US and Indonesia’s Tauzia Hotels, although it is “on a constant look-out for opportunities that are in line with our asset-light growth strategy”, Goh said.

A bigger scale and stronger loyalty and distribution network should accelerate the growth of management or franchised contracts. About 80 per cent of Ascott’s extended stay units are managed or franchised, while the rest is owned by its related investment vehicles such as private funds and hospitality trust. Ascott expects Oakwood’s 8,500 units in operation to bring immediate recurring fee income stream.

“We plan to onboard Oakwood properties onto Ascott’s loyalty programme, Ascott Star Rewards, to expand our customer base, drive direct distribution and enhance customer experience,” said Goh. “We also plan to include Oakwood properties in our other digital platforms such as our revenue management and customer management systems, enabling us to analyse data across our expanded portfolio to cross-sell our properties and drive more revenue and cost-synergies for our property owners.”

The Oakwood brand will remain, he said. “We intend to keep the Oakwood brand and build on the strong reputation and heritage of the brand, especially in markets across South-east Asia, North Asia and North America. We will continue to grow the Oakwood brand alongside Ascott’s current portfolio of global brands,” said Goh.

Strong like oak
Asked how the acquisition will strengthen Oakwood, its CEO, Dean Schreiber, said: “We are confident that the synergy with Ascott’s extensive commercial engine, complementary business development network and access to global hospitality talents will add value for our discerning guests, property owners and business partners.”

Despite the pandemic, Oakwood kicked off 2022 with a robust pipeline of projects under development, new signings and property openings, Schreiber said. “In the months ahead, we expect to reinforce our presence in key Asian gateway cities and enter new destinations such as Cambodia, Bangladesh and the Philippines.”

Schreiber is excited about future opportunities in the sector. “The extended stay segment is going through rapid evolution because post-pandemic travellers and real estate owners have realised the appeal of this sector,” he said. “Looking into the future, we are certain of greater product differentiation and disruptive services that will change the way we cater to the needs of our guests.”

His immediate priority is to ensure business continuity, hospitality excellence and employee welfare amid the transition period.

Frasers’ next move
Eyes are now peeled on Frasers Hospitality, linked to Thai billionaire Charoen Sirivadhanabhakdi’s TCC Group. At the time of writing in late July, Frasers Property is proposing to privatise its hospitality arm.

Frasers Hospitality boasts 21,000 units in 120 properties across 70 cities in 21 countries.

“Hard to say what is next for the Frasers Hospitality business, other than consolidation in this space will be ongoing, and with a mega-sponsor like Frasers Property, there has to be an upside for the circa S$2 billion portfolio,” said Williams.

Added Bill Barnett, managing director of C9 Hotelworks: “Frasers Hospitality has been hampered by its REIT vehicles and the proposal to privatise it would allow the group to be more aggressive in investing in its portfolio. At the end of the day, TCC is driving Frasers and they are a property developer at heart. But if they are cashed up, they could be more a formidable competition to Ascott, so watch this space.”

Horwath’s Hecker agrees. “The more likely result (instead of Frasers being acquired) is that the Ascott/Oakwood deal will put a fire under Frasers to expand bigger/faster,” he said.

But Hecker said investors must be prepared to pay. “There is less distress in the serviced apartments sector, and any transaction would likely be on full pricing or close to it.”

Asked if it has become critical for Frasers Hospitality to scale up further, its COO, Mark Chan, said: “It is certainly important, but being an owner-operator, we firmly believe that it is more important that we grow meaningful scale, with a considered approach from a product, brands, multi-city operations and partnership perspective.”

He sees the Ascott/Oakwood merger as an opportunity for Frasers Hospitality to “stand out more as a brand of choice in the extended stay market”.

In 2018, the company did a “deep review” of its business that covered growth, product development, brand relevance and differentiation. The pandemic accelerated change, resulting in a more “nimble” structure, a new website and the use of touchless technology such as mobile check-in/out, robotics and digital concierge powered by cloud technologies, Chan said. In-room facilities have also been adjusted, with better space usage, health and wellness features, and Wi-Fi connectivity, to meet more extended living, work-from-home needs.

“We have not stopped growing despite Covid-19, opening eight properties and signing 13 during this period. We expect to open another 12 properties over the next three to four years. Concurrently, we are developing our technology and infrastructure to ensure agility and get closer to the market,” said Chan.

“Despite Covid-19, most serviced apartments generally have been doing well, especially in Singapore, where their occupancies are in the 90s. Most are trading at S$300 a night,” said Choe Peng Sum, CEO, Pan Pacific Hotels Group (PPHG). The chain has five serviced suites in operation and six in the pipeline, four of which will open in the next six months.

One reason is fewer trips but longer stays. In 2021, the average length of stay (ALS) in Singapore was 22.4 nights, according to an HVS report, citing various quarantine measures and longer stays reasons.

ALS has since moderated to 7.1 days in 1H2022, from 3.4 days in 1H2021, latest Singapore Tourism Board data shows. But this remains a key impetus to fill up serviced apartments, which in Singapore require a minimum stay of six nights.

But what happens if duration of stay becomes short again? As the HVS report says, last year’s ALS was an “outlier”, not indicative of future ALS growth.

Arthur Kiong, CEO of Far East Hospitality, agrees. “We hope this trend (of longer stays) continues but we never know what will happen when airlines increase capacities and airfares become more moderate with increased competition.”

In July, FEH opened its Australian Adina serviced apartments brand in Singapore, a remake of the Regency House in Orchard Road. It intends to grow the Adina brand “selectively”.

Value spotlighted
But the value of extended stay, which Covid-19 has spotlighted, overrides any uncertainty that longer stays will remain.

For one, in an era of labour shortage, serviced apartments and co-living properties are “low maintenance” compared with traditional hotels. Fewer transient guests check-in and out, and they tend to take better care of their home-away-from-home, Goh said.

The sector also responses to demand for flexible leases that is driven by trends such as longer stays and digital nomads. Besides, who knows when the next crisis will appear.

Plus, Asia has lots of emerging markets, hence the need for extended stay accommodations.

“Companies are pouring foreign direct investments in emerging markets such as Vietnam and Cambodia, and are sending project groups and expats to set up factories and offices. These executives need more than a hotel room. This is also true in Bangkok, where there are lots of Koreans and Japanese investing in, say, car manufacturing, or in Jakarta, where companies invest in oil and gas, mining and shipping,” said PPHG’s Choe, who was formerly Frasers Hospitality’s CEO.

“Everyone is looking at opportunities, including us. But for us, only in certain places, i.e., corporate long stay in emerging markets,” he said.

There are downsides to serviced apartments, however. During peak periods, say, the Grand Prix F1 season in Singapore or a major convention in Hong Kong, hotel rates in those cities could soar by 100 to 200 per cent while serviced apartment rates are locked in, said Choe.

In the wake of Covid-19 and the Russia/Ukraine war, stability is king.