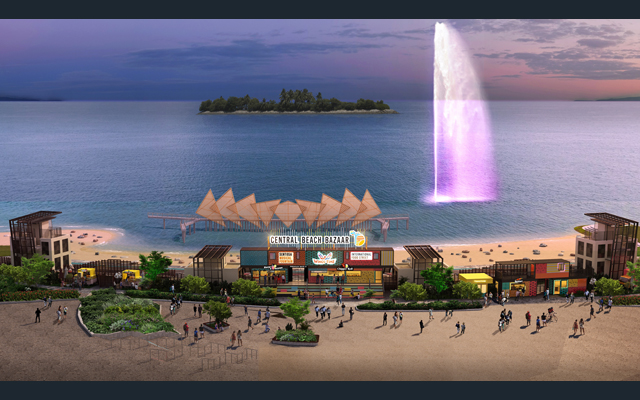 Mount Faber Leisure Group (MFLG) is set to debut this September a new cluster of F&B and entertainment that will give beach goers an enhanced experience from day to night in the heart of Sentosa’s beach district.

The Central Beach Bazaar, located between the popular Palawan and Siloso beaches and at the foot of Beach Station, will take in the 80-metre high Sentosa SkyJet, said to be the tallest fountain in South-east Asia; a revival of the iconic Sentosa Musical Fountain from the early 1980s but now with a new musical score; and the International Food Street, a collection of eight F&B street food concepts presented through food trucks, kombi vans and upcycled shipping containers.

Sentosa visitors can enjoy the Musical Fountain and Sentosa SkyJet up close in the day with a minimum spend of S$5 (US$3.55) at the International Food Street. The Musical Fountain comprises two five-minute performances – one with musical numbers that the attraction used to play in the 1990s, and the other a medley of the nation’s beloved National Day songs like Home and Count on me Singapore.

The Central Beach Bazaar will join the Wings of Time outdoor night show, an established attraction in the beach district that has been upgraded recently with refreshed pyrotechnic effects and a more spectacular finale.

A third new attraction, to be revealed at a later time, will offer simulation ride experiences and carnival games.

Thien Kwee Eng, CEO of Sentosa Development Corporation, said in a press statement: “The Central Beach Bazaar is a key milestone in the series of new leisure experiences coming onstream along Sentosa’s beaches. Together with the upcoming Palawan Sands and other novel offerings, the Central Beach Bazaar will give our guests a reimagined beach experience.”

According to Buhdy Bok, managing director of MFLG, the Central Beach Bazaar is one of the visitor experience innovations that were developed during the travel disruption.

In an interview with TTG Asia ahead of the press launch, Bok said MFLG had continued to invest in product development even during “the toughest period” when the pandemic had impacted international travel

He said: “Our approach was to remain mindful of the situation while still planning ahead. Six months ago, we opened SkyHelix Sentosa, which was also planned for and built during the pandemic.”

Bok said international visitorship has been on the mend since Singapore established the Vaccinated Travel Lanes in September 2021.

“There is a sizeable return of tourists, mostly from the region, but we are nowhere near pre-pandemic levels. This will take time, as our recovery is dependent on how airlift and airport operations are being rebuilt,” he said.

However, he has refrained from projecting visitorship to Sentosa, saying that it is “no longer possible to give a very long forecast these days due to so many unknowns”. A three-month outlook is more realistic, he said, adding that his team continues to be “very aggressive” with development and marketing while staying “practical and nimble” to face any situations that present themselves.

In response to TTG Asia’s question on how MLFG is dealing with the hospitality industry’s prevalent labour shortage, Bok said it is still actively recruiting while tweaking operations to minimise pressure on the existing team. Measures include adjusting menus, automating some food preparation processes, and outsourcing some functions.

“These changes will be permanent, as Singapore will always be operating in a tight labour situation so businesses will have to be more efficient with available resources,” he concluded.