The iconic Raffles Hotel Singapore’s longest-serving and oldest employee, Leslie Danker, happens to also be a passionate fan of the heritage property and the resident historian. He celebrates his remarkable 50-year career with the hotel with a limited edition guided tour that spills fascinating tales of the national monument 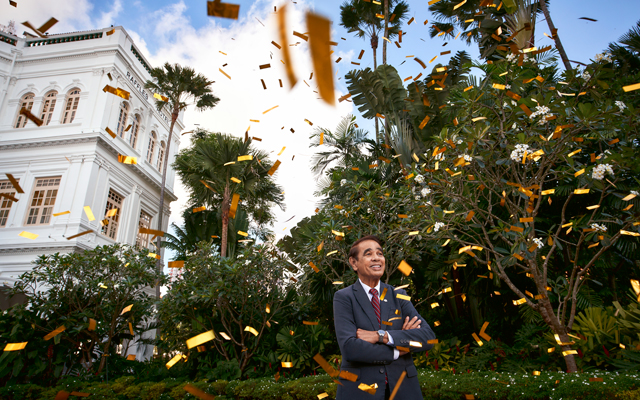 Slicing into my poached egg, out flowed a runny yolk as well as a teaser from Leslie Danker, the resident historian at Raffles Hotel Singapore. We were having breakfast at the Tiffin Room ahead of our Golden Jubilee Guided Tour, with Danker as my guide.

“Have you heard about the tiger that was shot dead in the storage space under the original Bar and Billard Room?” he asked.

I have never, which gave him the chance to relate the tale of the unfortunate big cat that escaped from a nearby circus and chose the underbelly of the Bar and Billard Room to rest for the night. It was the half-drunk headmaster of Raffles Institution from across the road who stepped in at the behest of terrified hotel staff and shot the tiger dead.

That was in 1902, long before Danker was born, long before he joined the hotel as a maintenance supervisor. It was Danker’s fascination with the hotel – first with the external colonial architecture when he was a young boy and later with the interior and storied history of the hotel when he was 18 years old and went in for the first time for a beer – that led him to seek a job with the hotel, study the hotel’s past and pay rapt attention to every aspect of the hotel.

His keen observation and understanding of the hotel’s past and present made him a valuable contributor to Raffles Hotel’s first major renovation and conservation project in 1989.

And now, he is sharing his stories with anyone who is keen to listen through the limited edition Golden Jubilee Guided Tours by Leslie Danker, created to honour his 50 years of service with the hotel. Why
Raffles Hotel Singapore needs little introduction, and is regarded as one of Singapore’s must-see landmarks for most travellers. Its majestic architecture has attracted both staying and non-staying guests to wander around within and question its history. Throughout the years, such impromptu queries were often directed to Danker, who is recognised among his colleagues as a walking hotel archive.

Recognising the value of preserving the many stories of the hotel’s past, which bring the hotel stay to life, Danker was made the official resident historian. Since then, he has led many walking history tours through the hotel grounds for curious guests.

What
The Golden Jubilee Guided Tours by Leslie Danker is created along with the launch of the hotel’s new museum showcase, sited within the serene Library. This museum showcase features never-before-seen memorabilia from Danker’s private collection, such as a room rate card from back in 1985, a menu from a time when fancy set dinners were priced at S$5 (US$3.70), and his ‘black book’ of meticulous notes on the hotel.

The tour, offered free to staying guests and at a fee of S$25 for the public, includes a walking tour led by Danker, a visit to the new museum showcase and a walk through the Hall of Fame gallery where photos of past rich and famous guests are displayed. For paying participants, the tour includes an exclusive Golden Jubilee cocktail, the Danker 1972, at Long Bar as well as a S$10 Raffles Boutique credit.

The tours are conducted every Thursday of the month of March and April.

After this period, the tour and museum showcase will be restricted to staying guests, with tours led by either Danker or other resident historians of the hotel.

Verdict
Danker is a great storyteller and has an answer for everything you ask him about the hotel. He is 82 years old, but his steps are brisk and his mind is rich. He will gladly tell you about his 50-year love affair with and loyalty to Raffles Hotel Singapore. At the end of the tour you leave with a better appreciation for the iconic building as well as tips for living a long and happy life.