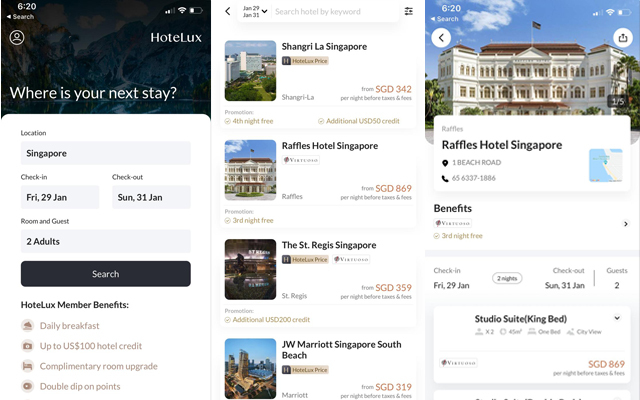 For an annual fee of S$99 (US$75), users who book via HoteLux will be able to enjoy benefits – typically offered to travellers who book through luxury programmes – such as complimentary room upgrades, daily breakfasts, and US$100 hotel credits. On top of that, unlike other OTAs, HoteLux awards bookers with two sets of points – HoteLux’s rewards points, and points with the respective hotel company’s own proprietary programme (i.e. Hilton Honours, Marriott Bonvoy).

For this year, HoteLux is focusing on building a strong brand in Singapore, starting with the staycation market. Currently, new users are eligible for an annual fee waiver on their first two hotel bookings.

Yihao Shi, managing director of HoteLux, explained: “People are desperate to travel, and staycations are the closest to travel they can get.”

Shi shared that since the app’s launch a few days ago, already 400 people have signed up – an indication that the app is moving in the right direction.

His aim is to build customer loyalty to earn repeat business. “In Singapore, right now, the borders are closed, but our members can make use of HoteLux to book staycations. In future, when borders reopen, and our members go to Bangkok, for example, they will think of HoteLux for their Bangkok hotel bookings,” he said.

This is built on his prediction that borders will not reopen until perhaps 2022. He added that 2022 will most likely see a “large volume of travel”, but for 2H2021, it’ll most likely be essential and business travel.

As such, from 2022 onwards, the focus will then be shifted to top inbound markets to Singapore such as Indonesia, Malaysia, Australia, and India.

When travel returns, HoteLux plans to scale up the app accordingly. Given that HoteLux’s parent company runs a similar app in the country under a different branding and name, building in more features – such as allowing restaurant and limousine bookings – into HoteLux in the future will be “easy” with the existing infrastructure.

When asked why HoteLux chose to enter the market during these uncertain times, Shi said: “Why not? No one is talking about travel now, so now is the best time to educate consumers about the brand and app.”