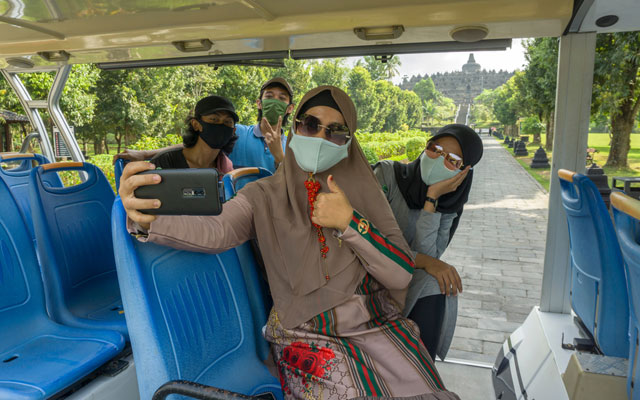 Eager to revive Indonesia’s ailing tourism industry, the Ministry of Tourism and Creative Economy has rolled out an incentive programme dubbed Big Promo to draw domestic travellers to tourist destinations in 12 locations across Indonesia, such as Belitung Island, Yogyakarta, Bali, Lombok, and Manado.

Under the programme, the government has readied 50,000 vouchers to help subsidise tourism expenditure, comprising a 225,000 rupiah (US$16) voucher which can be spent on staycations, tours and attractions; a meal voucher worth 100,000 rupiah; and a shopping voucher worth 75,000 rupiah.

Valid through year-end, the vouchers can be redeemed by domestic travellers when they purchase hot deals offered by participating hotels, restaurants, travel agencies and SMEs on the website bigpromo.co.id.

While acknowledging that the programme will not fully make up for the losses sustained by businesses hard hit by the pandemic, she believes that it will at least help businesses “to survive until the end of this year”.

As of November 17, 1,208 subsidised packages are displayed on the website. Under the subsidy scheme, a superior room at the One Legian Hotel in Bali is going for 225,000 rupiah per night, as compared to its usual rate of 450,000 rupiah. Elsewhere, KCBJ Tours has slashed the price for its Nusa Penida One Day Trip from 930,000 rupiah to 705,000 rupiah, while its 2D1N Staycation package at The Alena Resort in Gianyar, Bali, is priced at 275,000 rupiah per night, a 45 per cent markdown.

Taufik Nurhidayat, coordinator of tourism marketing for regional area one at MoTCE, said that Big Promo was designed to get pandemic-fearful locals travelling again domestically, without neglecting health protocols.

Travel providers have welcomed the programme with open arms, as it is expected to boost consumption and cushion the pandemic’s blow on economic activities.

With over 200 million people in Indonesia, a swifter recovery of the country’s tourism industry could happen on the back of intra-state travel, he added.

However, Bahriyansyah, owner of Bee Holiday and deputy secretary general of ASITA, bemoaned the programme’s belated launch, despite acknowledging that the incentives will be “quite helpful” to sector players.

According to him, nearly 1,000 packages have been submitted by ASITA members to the Big Promo committee since its November 16 launch – a “small” figure, considering the association has around 7,000 members across the country.

He attributed the low participation rate to the government’s sudden launch of the programme, and the lack of promotions surrounding it. As such, many ASITA members did not have sufficient time to meet the requirements, such as the need for an active tourism business certification (TDUP) or business identification number (NIB).

“Many members have yet to extend their TDUP or obtain an NIB because the majority of ASITA’s regional boards are inactive and their offices are also closed due to the pandemic,” Bahriyansyah said.

Jongki Adiyasa, executive director of Ina Leisure Tour and Travel and co-founder of Indonesia Inbound Tour Operator Association, opined that the vouchers would help hotels, restaurants, and retailers like souvenir shops, but it will provide little relief to tour operators.

Jongki explained that most tour operators do not sell individual components, but tour packages which include accommodation, transport, and meals. He cited the example of how the 225,000 rupiah voucher which can be spent on attractions will “mean nothing” to potential customers of tour operators, if the price of a tour package were, say, four million rupiah.

He, therefore, urged the government to give tour operators a meatier incentive that covers the whole package, not just an individual component like staycation or meal voucher.