What is one of the greatest joys in travel? To indulge in the array of culinary offerings a destination has to offer, no less. Featured here are six dishes, each unique to a region in Thailand worth travelling to – or better still – replicate at home when you miss their places of origin 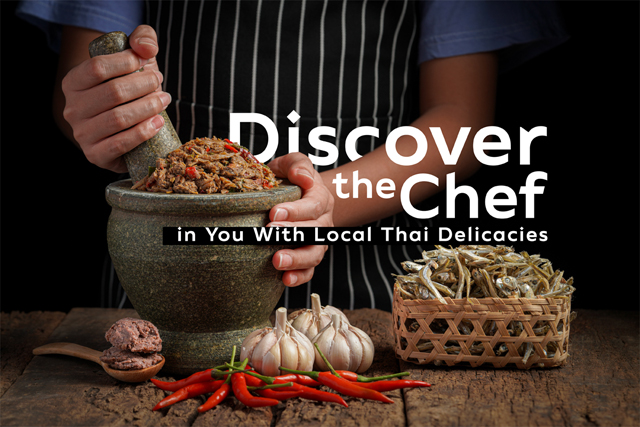 Brought to you by Tourism Authority of Thailand

As a largely agricultural province, it is little wonder this delicacy of Laplae District in western Uttaradit is derived from thoughtful food preservation methods by the locals in presenting rice in various shapes and forms. Rice vermicelli is stuffed into Khao Kap (thin wrappers made from rice flour), and then cooked in an assortment of flavours. The infusion is said to bring out the true taste of this Laplae-styled cuisine.

Lamnam Nan National Park: A place of serenity cloaked in forests and long mountain ranges, the national park features a freshwater aquarium, and is home to many waterfalls, rapids and small islands that are suitable for scenic rafting and other relaxing activities. Campsite facilities are available.

Laplae Capital Gate: A popular landmark in the province, archaeological surveys date its construction to the reign of King Rama I.

Sirikit Dam: The largest earth dam in Thailand straddling the Nan River, offering breathtaking scenary and vast spaces to enjoy the atmosphere. Rent a boat to stop by for a meal at restaurants alongside the dam.

Over here in Loei, fermented rice vermicelli is used in serving up a long-simmered pork broth accompanied by an assortment of vegetables, herbs and staple condiments – shrimp paste, lime and fresh crushed chilies – making it a welcome breakfast treat in the chilly mountainous region.

Suan Hin Pha Ngam: Time stands still as one gazes to limestone hills and karsts that have eroded over millions of years to form a picturesque backdrop for what is also known as the “Kunming of Loei”. A trail winds through the canyon, taking visitors to the relaxing Suan Hom and Phiang Din waterfalls.

Phu Tok: Here, the clouds come rolling in at sunrise, blanketing the mountain in a sea of fog. From this vantage point, visitors will have a panoramic view of Chiang Khan and the Mekong River.

Baan Kang Pla: Located in the outskirts of Loei city, this weaving group is popular for allowing visitors to experience the traditional art of weaving, as artisans use antiquated looms to produce fabric indigenous to the province. Not just another social enterprise, the weaving group also encourages interaction between villagers of this region, when they gather for large production orders for the gift shop.

Another rice derivative from fermented flour; the parcel is steamed to make a thin wrapper and folded in with mixed vegetables, topped with steamed egg and clear pork broth. A healthy and delicious dish renowned in Ban Na Ton Chan, a small district north of Sukhothai city.

Sukhothai Historical Park: Housed on archaeological grounds dating back to the Sukhothai Kingdom, this UNESCO World Heritage Site depicts the grandeur of the first capital city of Thailand. Visitors will be enthralled amongst the ruins of the royal palace and numerous temples, alongside ancient walls and moats. Expect to spend a full day at this facility.

Ganesha Gallery: Exhibits here portray a distinguishingly Brahman-Hindu influence, which entered Thailand during the early Sukhothai era.  In addition to the viewings, visitors can participate in celadon ware painting, which makes for a great souvenir.

Loy Krathong experience: Make your calendars for November, because, where better to experience the festival of lights than at its birthplace? Besides the historical park being the main celebration venue, the entire province will be alight with krathongs (floating water lights) and sky lanterns – quite a sight to behold.

This local delicacy is conceived from seablite native to the salt marshes of Samut Songkhram. The plant is cooked multiple times in water to unsalt, then dressed in a delicious medley of Thai-style spicy sauce made from lime juice, fish sauce, and palm sugar. A ladle of thick coconut milk on top usually rounds up the whole ensemble.

Rom Hoob market: This attraction boasts a couple of other associated monikers: “umbrella market”, “railway market”, or even, “risky market”, for its location along the railway track. No matter your persuasion, go there for a one-of-a-kind experience for fresh produce, and watch how the food vendors and trains co-exist with precision.

Bang Nam Pheung floating market: The charms here are the lifestyles of the villagers by the canal, and the availability of well-known community products and local food favourites. Tourists can rent a sightseeing kayak or bicycle to experience the local way of life; after all, this community has won an award for Best Urban Oasis of Asia.

An iconic provincial cuisine made from pork belly or collar, it is simmered with Bai Chamuang (cowa fruit), which is native to Chantaburi, giving the dish a distinctive sour note and fragrance.

Red eagle watch: You haven’t been to Chantaburi if you never saw a red eagle there. Go on an eagle-spotting boat trip in the mangrove forests of the Welu River basin, available all year round, and they usually make their appearances at around 3pm.

Pink Rock Terrace: The bay of Kung Krabaen is coveted by nature lovers and photographers, when morning and late-afternoon ebb tides reveal brilliant hues of arkosic sandstones. Best visited from the months of February to June.

Chantaboon Waterfront Community: Buildings on this 300-year-old street date back to the Rattanakosin era, and feature a blend of Thai, Chinese, French and Vietnamese architectural designs. Many of them are transformed into boutique accommodation, local museums and hip cafes today, where a visit to UNESCO merit award winner for cultural heritage preservation, Baan Luang Rajamaitri, should not be missed.

Aptly named after its village of origin, Sapam, this dish exudes Hokkien-Chinese influences by stir-frying thick egg noodles with seafood, pork, eggs and Chinese cabbage together. Another delicious rite of Phuket delicacy.

Laem Phromthep: Also known as Brahmas cape, it is located on Phuket’s southern-most tip. Visitors can savour breathtaking views of the Andaman Sea, and it is a popular observation point at sunset. A notable landmark is Kanjanaphisek Lighthouse, which gives a 360-degree unobstructed view of the cape, as well as an exhibition inside the lighthouse documenting its construction, amongst other maritime trivia.

Ban Bo Dan Hot Springs: Located in Tambon Na Toei on the Andaman coast, the water from the natural hot springs are laden with minerals, and are believed to relieve rheumatism, numbness and help reduce tension of both body and mind. Mineral baths are available daily.

Koh Si-Re: Make a trip to this destination for fresh seafood, and a glimpse into the lives of the oldest (and largest) community of sea gypsies (Chao Le) south of Mergui Archipelago. An additional attraction is the large reclining Buddha at the hilltop temple. The island is easily accessed from Phuket main island via a causeway.

For more on Thailand’s delicacies and other tourist initiatives, visit the Amazing Thailand Facebook page.