Bali is no stranger to adversity, having bounced back from bombings and natural disasters. But while coronavirus hasn't stripped the Indonesian island of its lustre among international travellers, it is bracing for a long road to recovery from the rampaging crisis, according to experts. 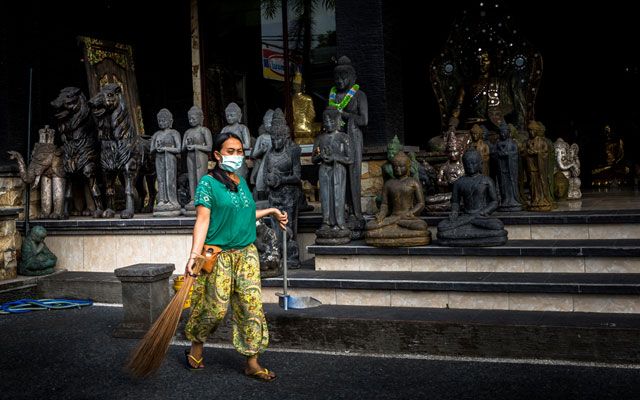 Bali is no stranger to adversity, having bounced back from bombings and natural disasters. But while coronavirus hasn’t stripped the Indonesian island of its lustre among international travellers, it is bracing for a long road to recovery from the rampaging crisis, according to experts.

Speaking at the recent webinar, Bali Tourism – The Way Back, organised by Delivering Asia Communications and C9 Hotelworks, Emily Subrata, director of Sudamala Resorts, said: “Bali is fortunate to be a well-known destination across all markets. I am in Australia at the moment and Australians are missing Bali (a lot), so they will return as soon as it is permitted. I know that the first flight to Bali will be glorious.”

Similarly, Visit Indonesia Tourism Officers (VITO) in France and Germany reported in early May that major tour operators revealed that clients were still holding on to their flight tickets to Bali which they had booked before the pandemic, in hopes of spending summer in Bali should the borders reopen by then.

Skyscanner’s report on the search demand to Denpasar over a 50-day period beginning first week of March showed that search results were relatively constant, at about 26,000 per day, with a recent increase of about 2,000 to 3,000 searches daily.

Skyscanner data also pointed to a rise in redirect customers, with more users leaving the site to complete the booking with an OTA or an airline, starting the last week of May, with the highest redirects recorded in mid-June at about 1,600.

While believing that Bali retains its strong appeal among global travellers, Jasper Palmqvist, STR area director for Asia Pacific, projected the island would take longer to recover from Covid-19, as compared to past crises.

Recounting Bali’s experience with past calamities, Palmqvist said the recovery period following the two Bali bombings in the early 2000s and SARS outbreak in 2002 took between 12 and 18 months, while the impact from Mount Gunung Agung eruption in 2017 lasted only a few months.

This year, with Covid-19, Bali is in the red. “This is nothing like any other crises,” Palmqvist said.

Looking at the international market, he explained: “Australia and China (Bali’s top source markets) have said they are highly unlikely to travel outside their countries in 2020.”

While Bali’s reopening to domestic travellers in mid-July brings hope for the island’s hospitality industry, it will likely be found wanting to plug the gap left by foreign tourists’ absence.

Palmqvist said: “The domestic market to Bali (traditionally) flocks to the south. The upscale hotels in the Kuta Legian Seminyak areas have enjoyed some 80 to 90 per cent (occupancy from the) domestic market (in the past) and might expect the return of business in Q3 or Q4. However, Ubud and Sanur traditionally are not popular domestically. The high-end international brands usually take international travellers.

“The new situation will shift competition. The larger and international brands with muscles will potentially market domestically. They will need that because the return time frame of the overwhelming part of their client bases is still unknown.”

He also projected the risk of a price war breaking out among the properties and that OTAs would be grabbing for consumer attention.

“This is not easy with the new protocols requiring social distancing and all, although this might be a selling point for some hotels, like villas, which will attract more demand,” he said.

Sudamala’s Emily also opined that the domestic market alone will not be able to sustain the sector. She said: “Those properties which traditionally do well with the domestic market will still suffer because the size of the overall pie has shrunk tremendously, yet the number of businesses wanting and needing that pie has largely increased.”

For the 34-key Sudamala Sanur Suites & Villas, which is situated in Sanur, a seaside town dominated by international travellers, making the domestic switch is no easy task, said Emily. It will require stakeholders in the area to devise programmes to attract the domestic market to the area.

The increasing supply of rooms in Bali will also affect recovery, according to Palmqvist.

“There will be about five per cent increase in supply up to end of 2021. Some projects may be delayed, but still, it will slow down the recovery even more,” he said.

As such, he advised hoteliers not to use previous crises as a benchmark, and to prepare a new game plan in anticipation of changes in demand.

Echoing that thought is Norbert Vas, vice president business development & operations of Archipelago International Hotels, Resorts & Residences, who said that among all the regions in Indonesia the group is operating in, Bali’s performance by far has been the weakest this time round.

“The occupancy of hotels in Bali has been far below 10 per cent, many are even below five per cent. Of the 17 hotels we operate on the island, we have had to close six,” Vas said.

He added that in some other suburbs of Jakarta like Bogor and Anyer, occupancy have recently surged to between 25 and 35 per cent in June. However, occupancy at the group’s hotels in Bali stalled at three to five per cent, sustained by airline crew and government business.

Vas elaborated: “We do not see (the situation in Bali) getting better anytime soon (or) the international market coming back soon. And with the confusion among domestic travellers on the different regulations, such as the different kind of tests (they must take) when travelling by air or sea, travellers are likely to postpone their trips until (they get the all-clear).”

In the meantime, Archipelago is managing its cash flows by reviewing operations at each property, renegotiating contracts with suppliers, and asking hotel owners to postpone fee payments until later in the year.

Some efforts by the regional and central governments to speed up the recovery process are underway.

The Coordinating Ministry of Maritime and Investment Affairs recently announced that the government is working on creating travel bubbles with China, South Korea, Japan and Australia, targeting business and investment opportunities.

Commenting on the move, Fransiska Handoko, government relations director of Bali Hotels Association, said: “Bali and Indonesia are ready for travel bubbles. However, the rest of the world still sees Indonesia as a high-risk country, so these plans are still in the discussion stage. It may be more logical to form travel bubbles within South-east Asia because of the shorter travel times. But we are still observing how the situation will evolve.”

The idea to create travel corridors has also been mooted by Indonesian ambassador to Germany, Arif Havas Oegroseno.

Speaking at the Road Map to Bali’s Next Normal webinar, organised by Bali Tourism Board, Havas said: “(To kick off travel movements), we can create a travel corridor between Germany and Bali, focusing perhaps on Nusa Dua Area with a chartered flight.”

He added that to facilitate that move, travellers have to present a negative Covid-19 test, and there has to be an immigration officer on board to check documents. Travellers should also get a guided, seamless service through the airport, a direct transfer to the hotel, and in-room check in.

TTG Asia understands this proposal is under study at press time.

Bali governor on July 5 announced the destination would be ready to reopen to international travellers from September 11, but at press time, the trade is still waiting for the central government to announce the border reopening dates and policies to start sales.