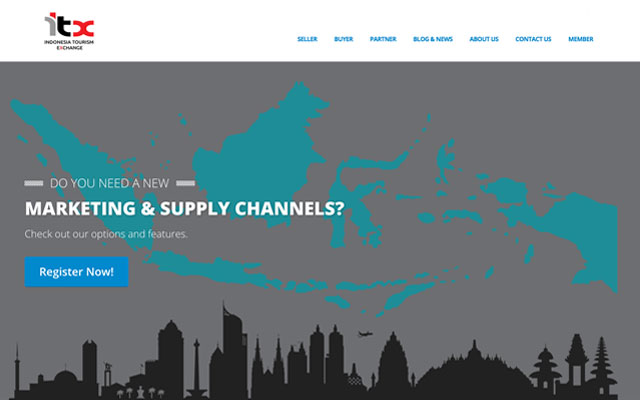 In anticipation of the eventual industry rebound, Indonesia’s travel trade is calling on tourism authorities to boost its online presence by enhancing the Indonesia Tourism Exchange (ITX) – a platform for tourism providers to market their products online – so that it is in a better position to compete with its regional and international counterparts.

With large-scale social restrictions currently in place, the need for tourism businesses to have an online presence post-Covid-19 becomes more crucial.

The trade’s appeal is in response to Indonesia’s minister of tourism and creative economy Wishnutama Kusubandio’s statement highlighting the importance of going digital during a recent web meeting with the Association of Indonesian Tours and Travel Agencies.

During the meeting, Wishnutama noted the rise of virtual meetings and webinars among tourism players amid the Covid-19 pandemic, urging the trade to ramp up digitalisation efforts.

Wishnutama promised that he would engage local e-commerce experts to build a new digital platform for Indonesian travel companies so that it could compete against foreign travel platforms when tourism resumes.

However, not all trade players are in favour of the idea.

Jongki Adiyasa, executive director of Ina Leisure Tour & Travel, said: “Making a digital platform is not like baking a cake. Based on my experience, it will take at least two years to make the platform work well, provided the travel company has very good IT staff.”

Though he acknowledged the importance of an online presence, Jongki said that it would be a costly endeavour for the country’s inbound players, who are mostly not tech-savvy, to go digital during the Covid-19, especially since their businesses have been hard hit by the pandemic.

He opined that rather than build a new platform, the government should work with inbound players and the makers of Indonesian marketplaces, such as TravelBiz, to enhance the existing ITX platform, especially in destination promotion efforts.

Lamenting how the current ITX platform does not sell tourism products crafted by Indonesians, Jongki hopes a refreshed version of the site will provide a space for inbound players to feature their products, such as tour packages and special bundled prices for attractions and accommodation.

For Ng, the most important thing that the government needs to take into account is that the platform has to adopt good SEO practices so that it can show up on the first page.

He noted that local industry players have already gone down the digital route a long time ago. “However, the question is how sophisticated our websites are. (Based on my observation), none of them is very good yet,” he said.

According to Indonesian travel companies that already operate online platforms, they face several difficulties in their digital marketing efforts, including failing to grow organic traffic, and improve SEO rankings.