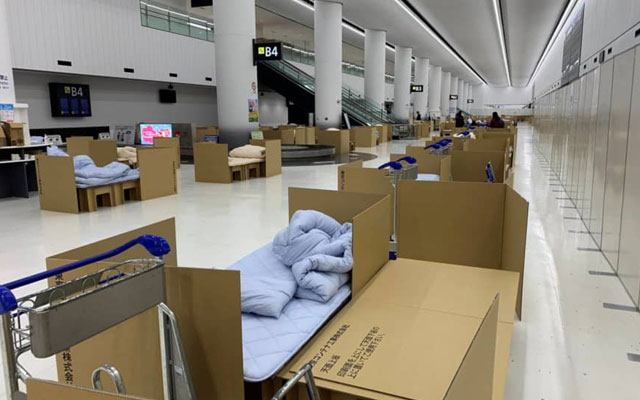 As of April 3, all passengers entering Japan must be tested for Covid-19 as part of the government’s measures to slow the spread of infections.

Cardboard hotel in Narita airport
1 of 2

Ordinarily, the result is communicated to the passenger within six hours but delays in processing have, at times, increased the waiting period to two days.

Passengers who can be picked by a friend or family member can leave the airport immediately after being tested. However, as passengers are banned from using public transport or flying domestically until they have been tested negative for Covid-19, those that cannot be picked up have been stranded in airport hotels or in the airport itself.

With hotels reaching capacity, the airport’s operator introduced the cardboard beds. The sturdy structures, which each include a futon mattress and quilt, are typically used in evacuation centres during times of disaster. Beverages and snacks are also being offered to passengers while they wait.

Arriving passengers who test positive will be requested to self-quarantine for 14 days.

Covid-19 testing is not yet carried out on domestic passengers, but Narita International Airport and Haneda Airport began temperature checks on Friday for all passengers departing on domestic flights, in a bid to allay fears that the virus will spread across the country as a result of travel during Japan’s consecutive national holidays in early May.

Passengers with symptoms may be refused boarding at the airline’s discretion.