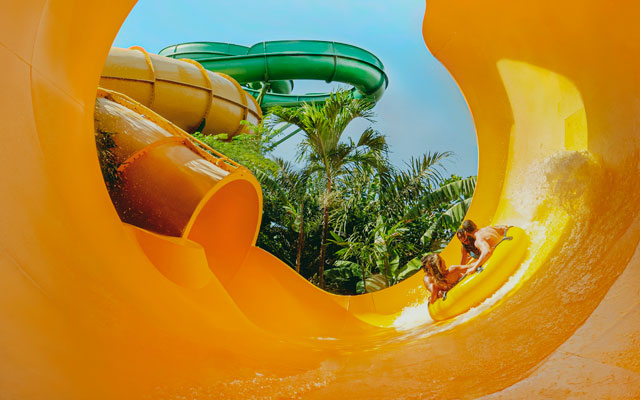 Waterbom Bali, a waterpark in Indonesia, is pushing the sustainability envelope with its composting, recycling, and waste reduction efforts, as evidenced in its recently released annual sustainability report.

The report, which tracks the waterpark’s consumption of its waste materials, water, and energy throughout 2019, showed that the attraction has recycled 80 per cent of its waste material; saved 554,402 kWh of grid energy; become CO2 neutral and CFC-free; and conserved 54,000m³ of water, totalling to three million gallons of water.

Essentially, this is equivalent to composting 141,776kg worth of waste material — or more than the weight of a Blue Whale; conserving enough energy to power The Statue of Liberty for three weeks; inflating the metric equivalent of 30 hot air balloons with water; and offsetting enough carbon emissions to plant 8,458 trees.

“Operating a waterpark across 3.8 hectares undoubtedly generates a lot of waste, whether it is from the water needed to operate our attractions, the energy needed to fuel the park, and the waste material that is created as a result of day-to-day operations. As a result, we have made a more conscious decision to minimise the impact we create in the beautiful island of Bali,” said Sayan Gulino, CEO of Waterbom Bali.

“Our collective efforts have enabled us to minimise our environmental impact, whether it is through composting, the use of renewable energy, or recycling water.”

By carefully sourcing materials used around the park and forming close bonds with suppliers, Waterbom Bali has recycled 230,030kg of its waste materials out of a total of 288,478kg (or 80 per cent of total waste generated).

Some 49 per cent of recycled materials goes back to feed its gardens as fertiliser through on-site composting, while 31 per cent is sent to a waste management operator that turns material into pig feed or is then traditionally recycled.

Furthermore, Waterbom Bali has been able to reduce its water usage through numerous water-saving strategies, including using efficient water appliances, recycling water for garden irrigation, reducing tap flow rates at its F&B outlets, and strategically placing the Lazy River at the heart of the waterpark with a closed loop filtration and circulation system that distributes water to various rides after it has been sand-filtered.

Lastly, Waterbom Bali’s energy consumption has been drastically reduced due to its various renewable energy efforts. From implementing the use of solar panels and LED bulbs to energy efficient pumps and CFC-free air conditioning units, all areas of the park have been built to minimise its energy consumption. This has also allowed the waterpark to save a total of 640.5 million rupiah (US$45,800) worth of energy per year.

Waterbom Bali’s sustainability initiatives don’t stop here. In 2020, the park aims to recycle 100 per cent of its organic waste within the park, rather than sending it to pig farms as fodder. This increases their recycling rates, composting process and also avoids organic material leakage.

The waterpark also targets to reduce its landfill rate by half, sending only 10 per cent or less of its waste to the landfill, advocating for further education on Bali’s waste and water management crisis, and leading by example in order to create an impactful systemic change within their park and spread the knowledge on sustainability with the wider industry.