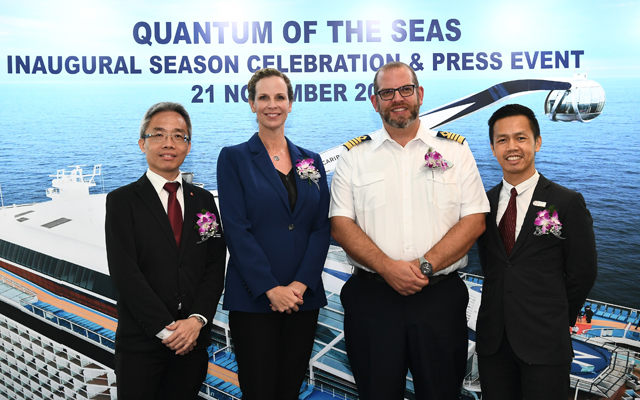 Royal Caribbean International has entered into a new multimillion-dollar marketing partnership with Singapore Tourism Board and Changi Airport Group (CAG) to promote fly-cruises.

The five-year tripartite collaboration is expected to bring some 623,000 international fly-cruise visitors to Singapore, and generate over S$430 million (US$315.6 million) in tourism receipts between end-2019 and 2024.

The partnership targets key regional markets including China, India, Indonesia and Malaysia, as well as longhaul markets like Australia, the UK, and the US.

Angie Stephen, managing director Asia-Pacific, Royal Caribbean Cruises, is confident that the partnership will “extend beyond five years”. She told TTG Asia: “This is because of the success that we’ve seen over the past 11 years. Cruising, and the awareness of cruising, is just getting started in Asia. I am very optimistic about the growth of cruising, (which is further) buoyed by a rising middle class.”

The partnership is also expected to generate at least 60 per cent higher tourism receipts compared to the previous partnerships combined. The first partnership ran from 2015 till 2018 to market Mariner of the Seas, followed by another three-year partnership launched in 2017 to promote Ovation of the Seas and Voyager of the Seas. Both partnerships generated a total of S$260 million in tourism dollars.

Aside from being a significant generator of economic benefits, South-east Asia’s cruise tourism sports a positive outlook, as the sector is expected to post growth of between 4.6 per cent and 6.4 per cent per annum to reach 4.5 million cruise passengers by 2035.

To support fly-cruises, a fast-growing passenger segment, CAG launched a seamless intermodal transfer service for passengers flying into Singapore and sailing out on cruise lines and ferries.

Passengers who take up this service will have their bags delivered from their arriving flights to their departing ship and enjoy facilities of the Changi Lounge located in Jewel Changi Airport, before being transferred to the cruise terminal. From December 1, 2019, Royal Caribbean guests sailing out of Singapore from China will be able to enjoy this seamless transfer service as part of the new fly-cruise travel packages.

This announcement is in tandem with the cruise line’s five-year Quantum Class ship deployment in Singapore. To kick off the partnership, Quantum of the Seas has arrived fresh from her multimillion-dollar refurbishment for her six-month homeporting season in the city state – Royal Caribbean’s longest ever Singapore deployment for a Quantum Class ship – which is expected to carry some 150,000 overseas and local guests.

Royal Caribbean also announced new amenities onboard the refurbished Quantum of the Seas, including an escape room and glow-in-the-dark laser tag, which target multigenerational travellers.

“We’re also working on a new children’s programme that we hope to announce next year. We’re also looking at themed cruises – for instance we’re partnering a local radio station in March 2020 – and we’ve also successfully completed a halal-certified cruise for a partner in Malaysia with 500 guests on Voyager of the Seas two weeks ago,” Stephen shared with TTG Asia.

She noted that it marked the cruise line’s first halal-centric initiative, and based on its success, is certainly something “we can explore in the future”.