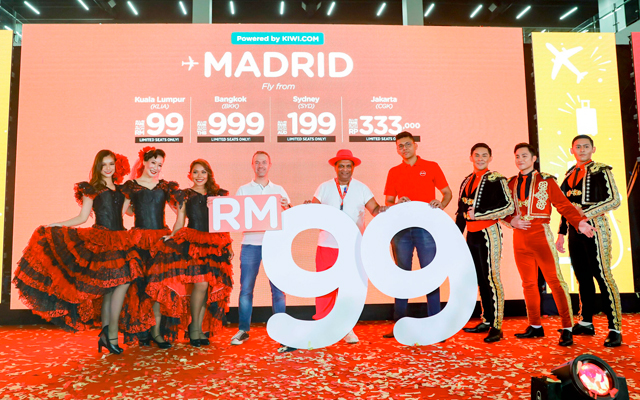 AirAsia’s unprecedented move marks the first time an airline is selling seats on other carriers. Developed in partnership with Czech travel technology company Kiwi.com on a profit sharing model, AirAsia.com’s users will be able to book travel on more than 100 airlines to destinations currently not served by AirAsia, including Europe, Australia, New Zealand, the Middle East, and the Americas.

Airasia.com CEO Tony Fernandes said: “Today, with the help of Kiwi.com, we are reinventing ourselves as more than just an airline, bringing to life our vision for airasia.com to be the region’s one-stop travel shop.”

Besides the “ideal partnership” with Kiwi.com, Fernandes shared that AirAsia is also exploring opportunities to partner directly with airlines and companies which complement its existing network and travel services beyond Asia-Pacific.

Airfares will compete on price, and many of the upcoming new flights will not be point to point, direct connections, Fernandes said during a press conference on Friday. Travel will not be limited to air, but will expand to the sale of bus and train tickets in future.

To celebrate the announcement and its partnership with Davis Cup by Rakuten, which takes place on November 18-24, 2019 in Madrid, Spain, AirAsia also kickstarted a global marketing campaign.

AirAsia will soon offer its members a chance to earn and redeem Big Points to pay for all its content offerings, including hotels, activities and flights on other airlines, which are purchased through its website.