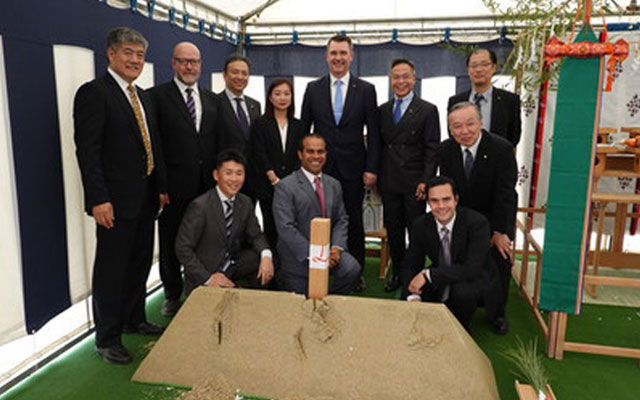 Carnival Corporation has officially began construction of the industry’s first cruise terminal in Japan, located at the port of Sasebo, which will support the country’s growing demand for cruise vacations and popularity as a destination.

The groundbreaking ceremony was attended by government, business and community representatives, including Carnival Corporation’s senior vice president port operations and development Remco Buis, and vice president of business development for Carnival Asia, Paul Chong; as well as representatives from the Japanese Ministry of Land, Infrastructure, Transport and Tourism (MLIT), and the city of Sasebo.

As part of a strategic partnership agreement signed in March 2018 with the city of Sasebo and MLIT Japan, Carnival Corporation will construct and operate the new terminal, expected to open in summer 2020.

The partners in the Sasebo development project are working together on an efficient, contemporary design for the terminal to accommodate the corporation’s existing and newest ships, said the company in a statement.

Under the 20-year agreement, Carnival Corporation and its cruise line brands will be granted berthing preference, enabling them to provide guests with optimised cruise itineraries when visiting the port.

Michael Thamm, group CEO, Costa Group and Carnival Asia, said that the new terminal “will complement (Carnival Corporation’s) strong presence in the Asia-Pacific region and furthers our commitment to help facilitate the rising demand for cruise vacations in the region”.

The company said it will continue to work with Japan’s government and MLIT to identify potential additional port development opportunities and future investments in the country.

Japan is a popular destination for seven of Carnival Corporation’s cruise line brands, including AIDA Cruises, Costa Cruises, Cunard, Holland America Line, P&O Cruises (UK), Princess Cruises and Seabourn. Overall, Carnival Corporation is expecting to accommodate an estimated 2 million passenger movements in the market in 2019, with nearly 800 calls from 15 ships from the company’s cruise line brands to over 50 ports in Japan.