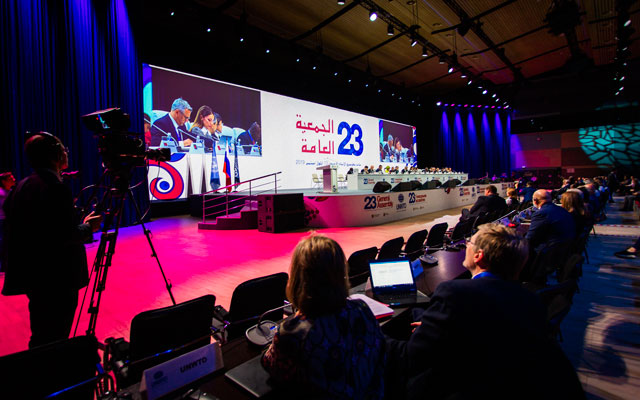 The 23rd session of the General Assembly of the World Tourism Organization (UNWTO) has opened in Saint Petersburg, Russia, with sustainability and innovation taking centrestage at the meetings between high-level state delegates and tourism leaders from around the world.

The General Assembly is set to pave the way forward for tourism’s contribution to the 2030 Agenda for Sustainable Development and tourism’s voice at the heart of the UN and the global policy agenda.

High level summits and debates will address key topics, including tourism’s increasingly-prominent role in advancing the sustainability agenda, private–public cooperation, and the place of innovation and entrepreneurship in the future of tourism, with a particular focus on job creation, education and the fight against climate change.

Opening the General Assembly, UNWTO secretary-general Zurab Pololikashvili told the organisation’s member states and its private sector affiliate members that the true potential of tourism as a driver of economic growth, sustainable development and equality has yet to be realised.

“An attitude of ’business as usual’ will not drive the change we want to see. The tourism sector needs to reflect the realities of a changing world,” Pololikashvili said.

He added: “That means promoting the spirit of entrepreneurship. It means training people for the jobs of tomorrow. And it means being open to innovation, including the power of technology to change the way we travel – and how the benefits that tourism can bring are shared as widely as possible.”

Pascal Lamy, the chair of the World Committee of Tourism Ethics and long-time advocate of the transformation of the existing code of ethics of tourism, said : “In the name of the Committee, I can only congratulate the countries who took this historic decision to elevate ethics of tourism into a binding legal instrument. Globalisation needs to be harnessed by principles that make it better, not worse, for human kind”

This treaty will be open to signature by member states from October 16.