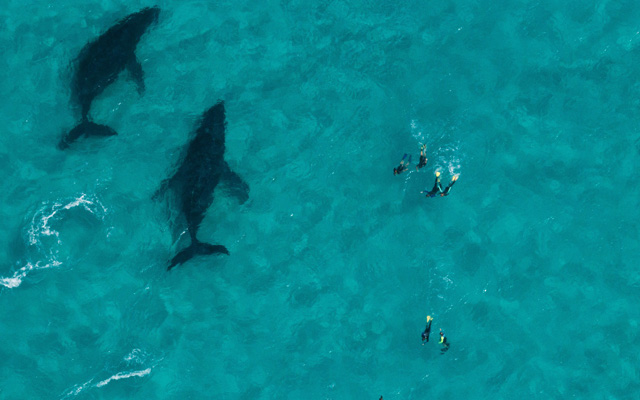 Western Australia (WA) can now lay claim to being one of the premier destinations for humpback whale in-water interactions after three years of trials in the World Heritage-listed Ningaloo Marine Park.

With two more trial years approved by the WA government for 2019 and 2020, this year’s season kicked off in Coral Bay on July 1 and will launch in Exmouth from August 1, both locations running till October 30. Over the past three years, tour operators licensed to provide in-water interactions with whales have utilised their expertise to improve the experience so as to deliver a safe, enjoyable and well-managed product that complies with government regulations for swimmers and observers.

The licenses are issued to existing and highly experienced whale shark tour operators who have been taking consumers to swim with or observe whale shark interactions for many years in the Ningaloo Marine Park.

Improvements in tour delivery include locating whales through spotter planes communicating directly to the boat’s head guide, direct radio contact between the Skipper and the in-water guide via radio, and on-board drones – all of which increase the success rate of interactions.

Regulations for licensed operators participating in the trials also allow vessels, when attempting an in-water interaction, to approach up to 75m from the side of resting whales or 150m in front of travelling whales. This also provides a better experience and close-up view for observers.

A total of 272 tours were conducted in 2018 – an almost 40 per cent surge since the trial began in 2016 – with the number of people attempting to swim with a whale more than doubling over the trial period, according to data from the Department of Biodiversity, Conservation and Attractions. The same study also showed that the interaction success rate has rose from 68 per cent in 2016 to 76 per cent in 2018.

Australia is one of three countries in the world where swimming with humpback whales is allowed, and the Ningaloo Marine Park is one of three locations in Australia where visitors can do so.