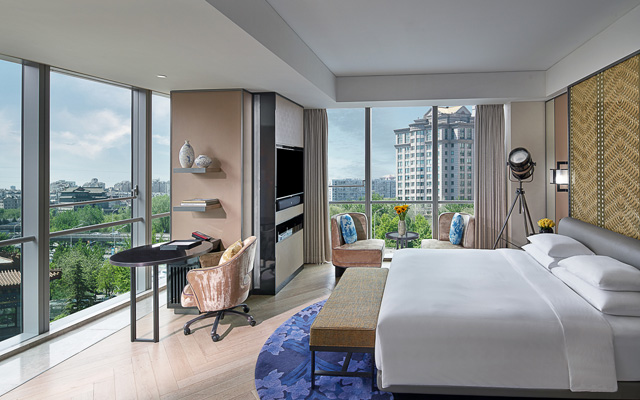 The Royal Park Canvas Osaka Kitahama, Japan
Royal Park Hotels and Resorts has launched the third Canvas – a millennial-driven brand – hotel in Osaka. The property offers 238 rooms across six categories, ranging from the 15m2 Comfort Double up to the 45m2 Suite. All rooms are non-smoking, except for several designated rooms on the second level. Also on the second level is the Canvas Lounge which offers snacks and drinks to hotel guests at no extra charge; the gym; and laundry room. Sofitel Beijing Central, China
Standing a short walk away from the Jianguomen subway station in the heart of Beijing’s civic and diplomatic area is the 345-key Sofitel Beijing Central. Aside from the three dining outlets, other facilities include a day spa, fitness centre and indoor pool. There will also be the Club Millésime Lounge – for Club guests – launching at the end of 2019. For event planners, the property boasts more than 1,500m2 of event space, comprising nine flexible meeting rooms that can hold a maximum of 400 delegates. Ozo Phuket, Thailand
Onyx Hospitality Group’s latest opening is situated in the heart of Phuket’s Kata Town, offering 255 guest rooms and suites across nine different categories in a series of five-storey buildings. Amenities include two swimming pools with water slides; an indoor air-conditioned relaxation space for reading or a game of pool; as well as showers and storage lockers for travellers arriving before arriving early or departing late. As well, the two F&B options are the all-day dining restaurant where guests can order a a selection of Thai, Asian and international cuisine; and the Pool Bar which serves up pizzas and snacks. Zagame’s House, Australia
The boutique hotel is the result of an A$18 million (US$12.4 million) transformation of the former budget Downtowner hotel on Lygon Street in Melbourne. The transformed design-led property offers 97 rooms complete with minibars, king-sized beds, European pillows, and organic UK toiletries brand, Cowshed. There is also a private event space, wine shop and bar, and café, on-site. This is the first of a series of boutique hotels that the owning Zagame family plans to expand in Australia.