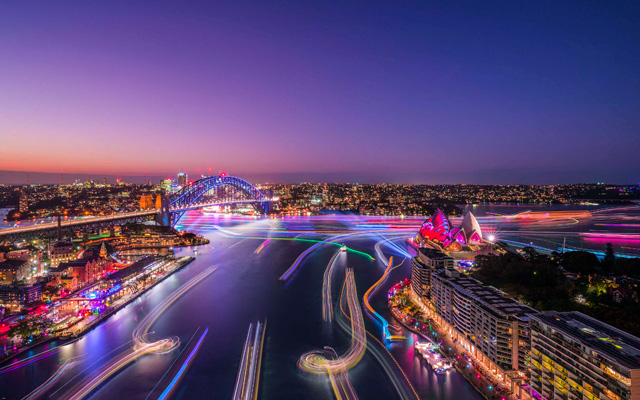 Vivid Sydney returns for its 11th year in 2019 with more family friendly fun than before.

The festival will transform the city from May 24 to June 15, with large-scale light installations and projections, free family events, and creative ideas and workshops for children, teens and families. Minister for jobs, investment, tourism and Western Sydney Stuart Ayres said: “With this year’s festival set to run for 23 days, families will have more time to take in the growing number of attractions and locations for this much loved event, and to visit more than once for the ultimate Vivid Sydney experience.”

Destination NSW CEO and Vivid Sydney executive producer, Sandra Chipchase, said: “There are nine precincts with illuminations and projections that light up the city and the imagination, plus some fun, hands-on ideas sessions to inspire those inquisitive, growing minds.”

Walk on the wild side
It’s not often you see tigers roaming free around Taronga Zoo. With Lights for the Wild, visitors follow an illuminated trail which winds through the zoo’s grounds and meet the giant multimedia light sculptures, from the magnificent Sumatran tiger and her new cubs to a swarm of tiny buzzing bees and a gorilla family.

Electric Wonderland
The Samsung Electric Playground at First Fleet Park is a giant illuminated wonderland inspired by features of the new Galaxy S10. Kids – big and small – can choose their own adventure, from playing with light patterns to enjoying views and other playground-like activities.

Pixar lights up
The Argyle Cut in The Rocks is back in 2019 with a new Pixar Animation Studios Installation. The creative light projection is a visual retrospective of behind-the-scenes artwork and animation of beloved Pixar characters.

Get among the art
‘Look but don’t touch’ doesn’t apply here, as kids are encouraged to participate.

Let it Snow is an immersive installation in Circular Quay that creates the sensation of standing under snowflakes, walk through it and feel the snow flurry around you. Beetopia is a touch-sensitive, giant glowing bee hotel which emits the smell of honey. KA3323, an interactive satellite dish overgrown with alien plant matter, reacts to the sounds of space.

Set up camp
Layers of light, sound and puppetry reflective of land and water will transform Exchange Place in Barangaroo into a Winter Camp. A six-metre-tall puppet Marri Dyin (Great Woman) is the embodiment of a contemporary spirit that recognises the influence of First Nations women, including Barangaroo, a Cammeraygal leader of the Eora Nation who lived in Sydney. You can find her every evening sitting and contemplating by the fire at her campsite and on Thursday to Sunday evenings she hunts and gathers along Wulugul Walk.

Play the harp
The Cascading Harp at the Chatswood precinct resembles a giant rope curtain adorned with clusters of traditional bells, LED lights and music that chime in time to the movement of the ropes. Watch children weave in and out of the ropes, running their fingers along the jangling bells.

A place to call home
Parents will have very different memories of dancing at Home nightclub back in the day, as did house DJ Kate Monroe before she had kids. She created Kiddo Disco so parents could boogie on down with their kids under the disco ball. The little ones can participate in disco dancing lessons and play games to positive, kid-focused tunes, while mum and dad relax in a safe, kid-friendly environment.

I believe I can fly
Volaré, which means ‘to fly’ in Italian, is the newest ride at Luna Park and claims to be Australia’s largest and highest wave swinger. So strap in and enjoy the ride.

Discover what lies beneath
Showing there’s more to Sydney Harbour than what we see above the surface, this year, Customs House will be transformed into an underwater wonderland. Under the Harbour is deep-dive underwater encounter that draws visitors in to a watery wonderland of neon sea creatures.