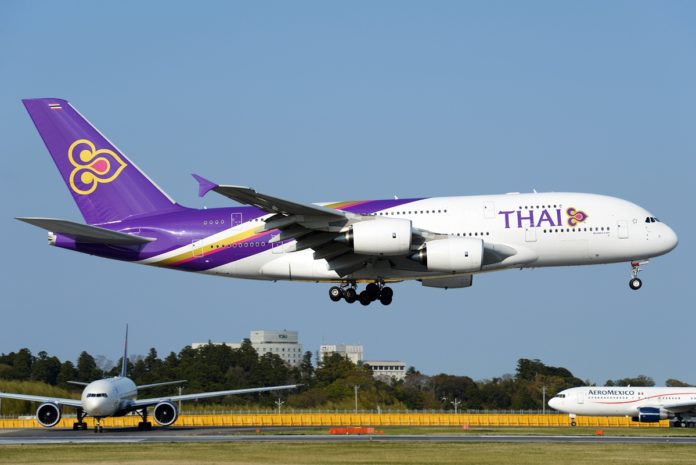 Thai Airways International (THAI) reported an operating loss of nearly 3.7 billion baht (US$111.6 million) in 3Q2018, compared to under 1.9 billion baht in 3Q2017, attributing this to natural disasters, a decline in the Chinese market and the 40 per cent rise in fuel cost.

Intense competition in the aviation industry has persisted into 3Q, with rising world oil prices that caused a reduction in travel demand while operating cost increased.

During the third quarter, total expenses increased by 5.3 billion baht or 11.3 per cent over the previous year due to an increase in fuel expenses of 3.5 billion or 29.4 per cent.

Non-fuel operating expenses increased by 1.9 billion or 5.5 per cent from last year, mainly due to the rise in maintenance and overhaul expenses as well as the increase in aircraft and spare part leases.

In September 2018, THAI was impacted by natural disasters including Typhoon Jebi that hit Japan and resulted in temporary closure of Kansai International Airport due to damaged and flooded runways.

The earthquake in Hokkaido and Typhoon Mangkhut in Hong Kong also forced THAI to cancel flights to several destinations.

The airline and its subsidiaries generated a total revenue of nearly 48 billion baht, a 2.2 per cent increase from the same quarter last year. The airline attributed increased revenues to excess baggage revenue at THB 304 million or 0.8 per cent from an increase in passenger traffic.

Passenger traffic (RPK) increased by one per cent, while average cabin factor was 77.5 per cent, down from 78.2 per cent last year.