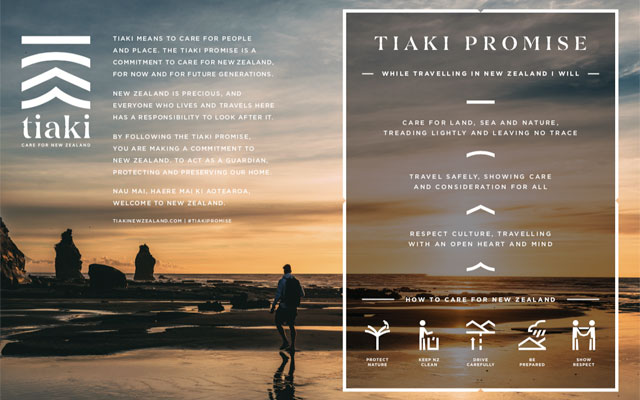 New Zealand’s tourism industry has come together to launch an initiative inviting visitors to care for its land and environment.

Under the banner of Tiaki – Care for New Zealand, the industry has launched the Tiaki Promise, which actively encourages all visitors to experience New Zealand in a way that keeps them safe, protects the natural environment, respects all cultures and preserves the country for future generations.

Tourism New Zealand’s chief executive Stephen England-Hall said: “The Tiaki Promise reminds people to travel responsibly as they enjoy what our country has to offer, making it clear what behaviours are expected from putting rubbish in the bin to driving safely and showing care and consideration for all.”

Visitors to New Zealand will learn about the Tiaki Promise before arriving and while travelling around the country. It will be promoted widely by all participating organisations and among the New Zealand tourism industry. Information will initially be available in English, Te Reo Māori, German and Chinese, with more languages to follow.

Social media support for the campaign will also be mobilised using the #tiakipromise hashtag.

Tiaki means to care for people and place in New Zealand’s native language Te Reo Māori. The Tiaki Promise draws from indigenous Māori culture and tradition, and the belief that “people and land are one”, to promote responsible tourism.

According to a statement announcing the campaign, the Tiaki Promise symbol reflects the four core domains that shape New Zealand’s environment: Ranginui is the Sky Father, Tāne Mahuta is the Forest, Papatūānuku is Mother Earth and Tangaroa represents the oceans, rivers and lakes.