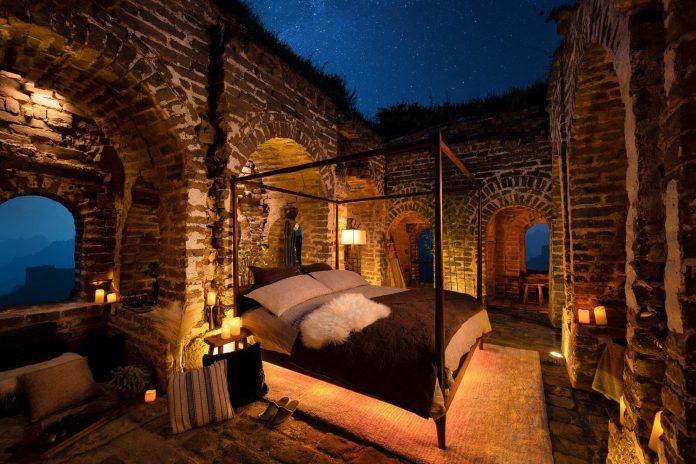 Airbnb shows it does not take its tagline “don’t go there, live there” lightly, having added the Great Wall of China to its platform not merely as a sightseeing option, but as a complete overnight stay experience.

The homesharing platform said it worked with historians and preservationist groups to open up “unprecedented access” to the world wonder, allowing guests to spend the night in a custom-designed home situated along the ancient portion of the wall.

High above the ground within a centuries-old tower along the Great Wall, Airbnb has created a bedroom offering 360-degree views and a vantage point for stargazing.

At sunset, guests can enjoy a dinner with multiple courses, each representing a different aspect of Chinese culture. Dinner will be accompanied by a traditional Chinese music performance, which is bookable year-round for all travellers to China.

The following morning, guests will embark on a sunrise hike through China’s countryside while learning about the Great Wall, its heritage, history and protection efforts from the wall’s official historians.

Airbnb has launched a contest to select four winners to enjoy its new offering, and is taking the chance to plug its Airbnb Experiences category of products.

During the stay, each winner will also have the option to choose from Airbnb Experiences currently on the platform, such as making their own personal stamp by learning Chinese seal-engraving or learning calligraphy on Chinese traditional fans during a personal Chinese calligraphy course.

Over the past year, the number of Airbnb listings in China has grown by 125 per cent, and there have been more than 3.3 million guest arrivals in Airbnb homes in China, it said.