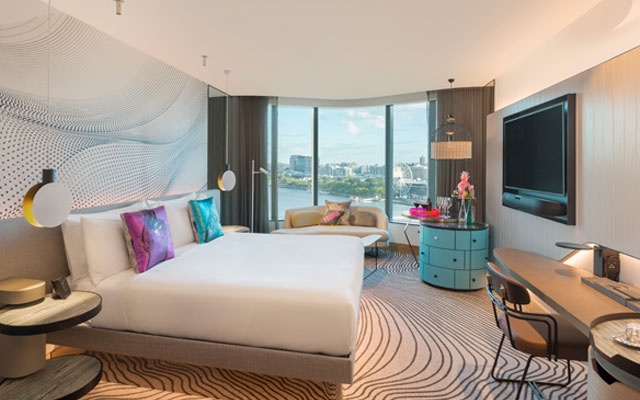 W Brisbane, Australia
W Hotels has re-entered the Australian market with its first property overlooking the Brisbane River in Brisbane’s CBD. The design of its 312 guestrooms and suites weave in influences from Australia’s indigenous roots and colonial heritage, and boast views of either the Brisbane River and Southbank, or Mount Coot-tha. Amenities on-site include three F&B options, the Away Spa (complete with vitality pools, relaxation pods, salt inhalation chambers and aromatherapy steam rooms), gym, and a heated outdoor pool on the fourth floor. For event purposes, the property offers 1,100m2 of event space including the 595m2 Great Room as well as four versatile Studio Rooms.

Bellagio Shanghai, China
The first Bellagio-branded hotel outside the US has opened on the banks of the Suzhou river, next to the historic Waibaidu Bridge on the northern end of the Bund in Shanghai. The hotel features 162 guestrooms and suites, measuring 60m2 and 100m2 respectively. Suites at the Bellagio Shanghai are all tended to by a private butler, and some also come with a private terrace. There are four F&B venues on-site, as well as a 1,900m2 spa – which comprises five treatment suites, a heated pool, vitality pool, sauna room, steam room and gym. There are five venues totalling 1,800m2, including a Grand Ballroom with a seven-metre-high ceiling. Swiss-Belhotel Pangkalpinang, Indonesia
The provincial capital of the Bangka Belitung Islands, which lie just off the east coast of Sumatra, has welcomed the new upscale Swiss-Belhotel Pangkalpinang. This new-build hotel offers 145 rooms and suites with regular mod-cons such as complimentary Wi-Fi, international plug sockets, mini-bars and cable TV. Amenities on the grounds include the Swiss-Café Restaurant, lobby lounge, wine bar, 24-hour room service, fitness centre, spa and outdoor swimming pool. Three meeting rooms and a ballroom provide flexible options for all types of events, where the largest space can hold up to 875 people. Marriott Executive Apartments Hangzhou, China
This property in Zhejiang Province’s capital city features 142 fully-serviced apartments ranging from 40m2 studios to 140m2 three-bedroom suites. Each apartment is outfitted with a fully-equipped kitchen, free Wi-Fi and satellite TV. Residents can make use of meeting rooms, a kids’ club, a mini-theatre and health club facilities such as a 24-hour fitness centre, an indoor swimming pool, as well as a sauna. On-demand services such as housekeeping, grocery shopping and chauffeur-driven limousines can also be arranged.