The HSBC Singapore Rugby Sevens in its third edition this year attracted more spectators than the last, thanks in part to its bigger lifestyle carnival offerings for families and fans 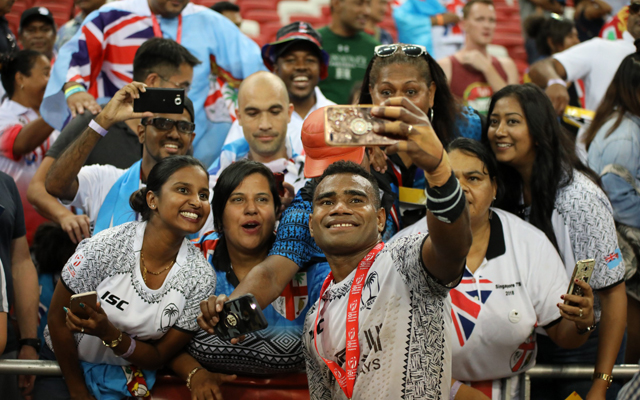 WHAT
Since its debut in Singapore three years ago, the HSBC World Rugby Sevens Series has gained a following of veteran and new fans of the sport. This year, organiser Rugby Singapore sought to increase its popularity among the general public – including non-fans – by billing the event as the “Family Sevens” leg of the HSBC World Rugby Sevens Series.

It did so by expanding its family-friendly carnival offerings, including a 20,000m2 FunZone featuring Hasbro brands, The Transformers, Nerf and My Little Pony.

It also signed on more partners such as official apparel partner Headhunter Sport, dining and retail outlets, musicians and performers, tourist attractions and entertainment venues, as well as booth vendors for its fringe events. WHY
A weekend at the games is contagious fun, and now with vibrant and lively tents of fringe activities and street food, as well as live performances for both kids and spectators adding to the atmosphere, it is easy to get caught up in the rugby rave.

As the headlining act, popular band Village People, took to the stage, leagues of fans cheered and danced on the bleachers. Others used the intermission to mingle with each other over drinks and grub. Some others – mostly children – took the chance to try their hand at the sport.

Outside the stadium, visitors drawn to the festivities also thronged the non-ticketed Singapore Rugby Carnival, where children could ride on Strider bikes and even race it out in a Spartan Mini Race.

Those seeking further fun and food outside of the event could also enjoy exclusive promotions from event partners, and these included dining options at Pan Pacific hotels in Singapore to special admission prices to AJ Hackett in Sentosa.

After the games, shuttle buses were at the ready to whisk attendees over to Clarke Quay, where the official Music After 7s after-party took place.

HOW
The fringe activities, booths and stalls set the tone for the sports weekend and festival atmosphere the organisers were gunning for. What it could greatly benefit from is even more support and partners, in order for the event to achieve a scale large enough to put Singapore Rugby Sevens on the country’s event calendar.

VERDICT
If this year’s carnival is a good indicator, the Singapore Rugby Sevens could grow into a festival weekend that entices overseas travellers – and not just fans – to fly into the country for.