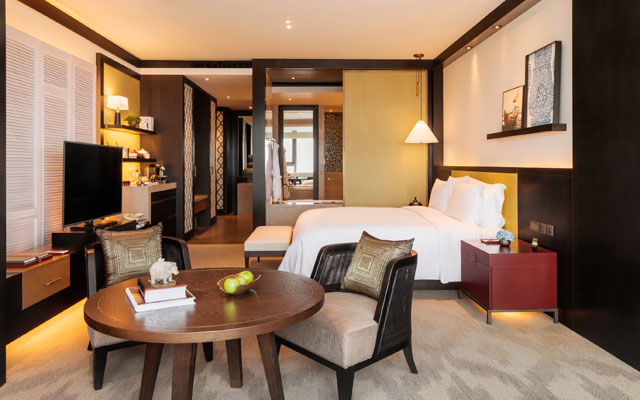 Rosewood Phnom Penh
The first urban hotel in South-east Asia for Rosewood Hotels & Resorts has opened in Cambodia’s capital. There are a total of 175 rooms and 37 suites, each furnished with large, window-facing tables – that double as dining or work spaces – opening out to vistas of the city skyline. The residential-style guestrooms start from the 50m2 Executive Room to the Norodom House at 225m2. Facilities include a 20m-long indoor lap pool, spa, gym, three restaurants and the highest bar in Phnom Penh – uniquely perched on a cantilevered terrace on level 37. Wyndham Dreamland Resort Bali
The 177-key resort is the Wyndham Group’s second on the Indonesian Island. There are seven room categories ranging from the 36m2 Deluxe Room to the 72m2 suites with extended living areas and outdoor Jacuzzis in ground level units. There are also eight one- and two-bedroom villas, each featuring its own private swimming pool. For meetings and events, the resort has three boardrooms, as well as a larger function room for up to 300 people for a seminar or 250 for a banquet. Amenities include three F&B venues, two swimming pools and the Tirta Spa – a complex with six treatment rooms and a yoga deck. Radisson Jodhpur
The Radisson has made its debut in the Blue City of Rajasthan in India. The hotel comprises 96 rooms across six categories, some of which come with separate living rooms. Onsite amenities include a fitness centre, spa and four F&B venues. Radisson Jodhpur boasts over 2,787m2 of total indoor meeting space comprising three banquet halls, as well as a 1,300m2 outdoor party lawn. Hilton Fuzhou
Occupying levels one, four and 39-55 of the Sandi Lianbang Building in the Jiangbin region is Hilton’s second outpost in Fuzhou. The hotel has 331 rooms and suites featuring floor-to-ceiling windows and stand-alone bathtubs. Facilities include an indoor infinity pool, a 24-hour fitness centre, two restaurants on the 39th floor and a lounge on the 40th. There are also 11 function rooms, including three ballrooms, featuring state-of-the-art audiovisual equipment and access to a special vehicle lift.