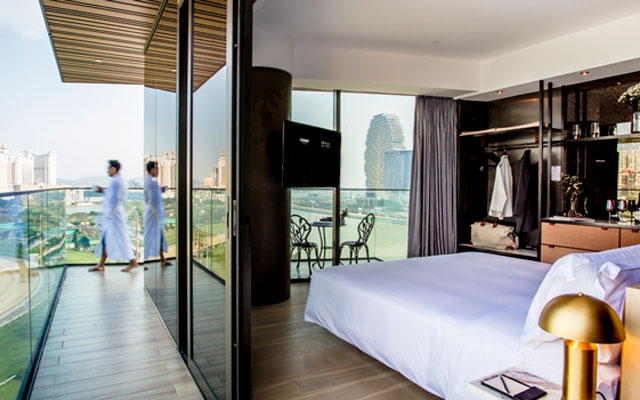 Lexis Hibiscus Port Dickson
The hibiscus-shaped property in Malaysia boasts 639 sea-facing pool villas, each with its own pool and steam room. Facilities include a spa, kids club, karaoke facility and a watersports centre. In addition, there are three restaurants, as well as a stretch called Hibiscus Walk that provides guests the opportunity to sample popular Malaysian cuisines. For functions and events, the sprawling resort has no less than 15 meeting spaces, including the Hibiscus Grand Ballroom that can seat up to 700 and the boardroom for 20 pax. Waldorf Astoria Chengdu
Located in Chengdu Hi-Tech Zone, the 289-room Waldorf Astoria Chengdu is housed within the high-end in99 Plaza, a 190,000m2 mixed-use development. Guest rooms at the 52-storey, Art Deco property start from a spacious 50m2, each featuring the signature Waldorf Astoria bed, a walk-in closet, marble bathrooms with double vanities and a personal concierge cabinet. It is home to six restaurants and bars, a grand ballroom and five meeting rooms with a combined area of over 2,000m2, the Waldorf Astoria Spa, a 24-hour fitness centre and a 25m-long heated indoor pool. Hotel On The Park
Resorts World Genting has reopened The Theme Park Hotel after a four-year renovation. Now called the Hotel On The Park, the hotel has retained all of its 448 rooms, featuring brighter colours and quirky spaces such as the 743m2 lobby with a stack of giant tea cups. Previously, most rooms could only fit two people, but there are now options for larger groups of four to six people, plus four honeymoon suites that are standalone units. Wi-Fi is complimentary, in addition to a grab-and-go F&B outlet Eatopia. The Macau Roosevelt
At the five-star Macau Roosevelt, the 368 guestrooms are inspired by Old Hollywood and its glamour – think ebony-lacquered burnt wood doors, polished bronze and carved Italian marble. Facilities include a restaurant, fitness centre and an open-air swimming pool overlooking Macau’s Jockey Club. The 12-storey hotel neighbours the Macau Jockey Club in the Taipa district, and is a short drive from the casinos and tourist attractions such as Coloane Village. The Karuizawa Marriott Hotel (pictured above) is located 70 minutes away from central Tokyo and offers 142 rooms, some of which feature forest views and private hot springs. There are dog-friendly cottages onsite as well. Facilities include a restaurant, three conference rooms, spa, fitness centre and a communal hot spring bath.

Nestled in the wooded hills of the Izu Peninsula is 128-room Izu Marriott Hotel Shuzenji, some of which with its private open-air baths. Facilities include a restaurant, a communal hot spring bath, fitness centre, golf and putting range, tennis courts, as well as two banquet halls.

Fuji Marriott Hotel Lake Yamanaka offers 105 rooms, some of which are Japanese tatami while the rest are Western-designed. Some rooms feature private hot spring baths and views of Mount Fuji as well. Facilities include a restaurant, private room for 40 guests, two conference rooms, a communal hot spring bath and tennis courts.

Located close to Kyoto, Lake Biwa Marriott Hotel offers 274 guestrooms, most of which face Japan’s largest lake. Facilities include a restaurant, a banquet hall for up to 500 guests, a communal hot spring bath, 1,000m2 gym, tennis and futsal courts, an indoor swimming pool and a planetarium with 166 seats.