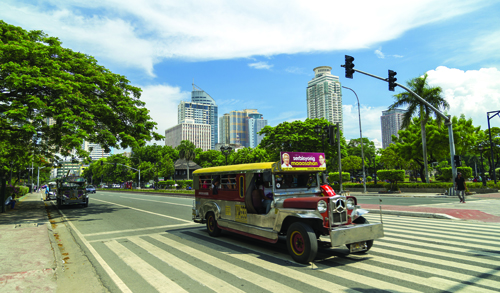 The Philippine capital city has become a mere transit or bypassed altogether as carriers go straight to secondary gateways. Rosa Ocampo, based in Manila, looks at its plight, which is worsened by other challenges From several years ago when virtually all tourists arrived at the country’s only gateway at Manila’s Ninoy Aquino International Airport (NAIA), as of January, only 68 per cent do so, with the rest through secondary international gateways.

The percentage of arrivals at NAIA is likely to drop further as, since last year, more non-stop flights have been mounted from the country’s top source markets – South Korea, the US (Los Angeles), Japan and China – to the most popular sun-and-sea destinations Cebu, Kalibo and Caticlan (Boracay) and Palawan, where an international airport has just opened (late-April).

More regional and chartered flights are also expected for Clark, Davao and other destinations outside Manila, said Erwin Balane, chief of route development at the  Philippine Department of Tourism (DoT).

As a result, leisure travellers are bypassing Manila to save time and cost or, if they’re unable to do so, shorten their stay in the metro given their perception that it has few tourist attractions, a lot of grime, traffic congestion and one of the worst airports in the world.

Blue Horizons Travel and Tours senior sales and marketing manager, Marjorie Aquino, said:“For our mainly European clients, Manila is only a drop-off point for tours, with clients spending three-day/two-night upon arrival before embarking on beach holidays, and spending another night in Manila before departing the country.”

While it used to be the destination, “Manila has become a destination for casino players and MICE,” said Rajah Tours president Jojo Clemente.

Within the strip of reclaimed land at the Entertainment City are three integrated resorts and a fourth to be launched within the next three years or so. They were built on the premise of getting high rollers from China that initially didn’t materialise due to the Chinese government clampdown on corrupt activities, said Joey Bondoc, research manager, Colliers International.

These integrated resorts continue to increase the supply of upmarket hotels along Manila Bay which is also known as MICE area. Meanwhile, Colliers has projected 4,000 additional keys to be added to the total stock in metro Manila this year.

Clemente noted that some Makati hotels have already “substantially” reduced their rates from three-and-a-half years ago. “They realise they cannot sustain the rates…only casino hotels can do that,” Clemente explained.

Makati CBD hotels, which used to command the highest rates in Manila (except for the Marriott at Resorts World Manila which is raking in good business), do not any more command a rate premium over their Manila Bay counterparts. There has also been a growing geographical grouping of hotels in Bonifacio Global City, Ortigas and Quezon City.

What to do?
So what’s being done to make Manila more sellable?
The reduced rates may help, along with the weakening of the Philippine peso, from 47.50 last year to 50 pesos to the dollar early this year.

In fact, tourism secretary Wanda Teo in an earlier interview in February lamented the “exorbitant rates” of tour packages including some in Manila. “Throughout my long career in the travel and tour business, travel agents and tourists complained about the expensive tour packages to the Philippines. I found it difficult to market our country with these exorbitant rates,” she said.

Teo explained that other South-east Asian countries, and even Japan, “sell reasonably priced packages, especially after a natural calamity or political upheaval, so foreign travellers would be enticed to visit after a crisis”.

Rajah Tours’ Clemente agreed: “It’s still a price-driven industry especially compared with Thailand, so anything that makes us closer to what Thailand is offering is better for us.”

But to make Manila more sellable, other efforts are being done. A travel consultant has created tours that avoid passing through seedy and grimy areas which the metro has become notorious for.

Philippine Tour Operators Association (Philtoa) president Cesar Cruz noted a “modularisation” in  tours, which entails less travel time through simplified means of transport and better road connectivity. As well, tours that don’t combine cities instead focus on one area like old Manila for example, without crossing over to Makati lest the tourist remembers the traffic congestion the most.

Philtoa is also mapping out tours combining neighbouring cities to lessen travel time, such as Marikina and Pasig for arts and crafts; Navotas and Malabon for culinary programmes; and a branding such as eco-hub for Quezon City tours.

Cruz pointed out there are now tours that were impossible in the past, such as shopping tours in the huge retail and wholesale area in Divisoria which is now cleaner and more organised. There also are some interesting tours of Luzon such as Tagaytay, Laguna and Batangas with Manila as starting point.

Haranah Tours managing director Jasmine Tan said the company has opened Haranah Eco Park in Tanay, Rizal, just a couple of hours from Manila as the easily accessible and bucolic Rizal with its varied landscape of mountains, rivers, caves and waterfalls is not yet known to tourists.

Tan recommends a night’s stay after arrival in Manila and another night before leaving “more for resting and getting to know the capital and the areas around it”.

Clemente suggested encouraging more investors in areas that are not yet popular and in new destinations that can be accessed from Manila, to take back some of the critical mass from major destinations like Boracay and Cebu.

Meanwhile, tourism secretary Wanda Teo is in discussions with Manila stakeholders to revitalise urban tourism in the metro, saying that it is paying the price of progress in the form of traffic, congestion and lack of urban planning.