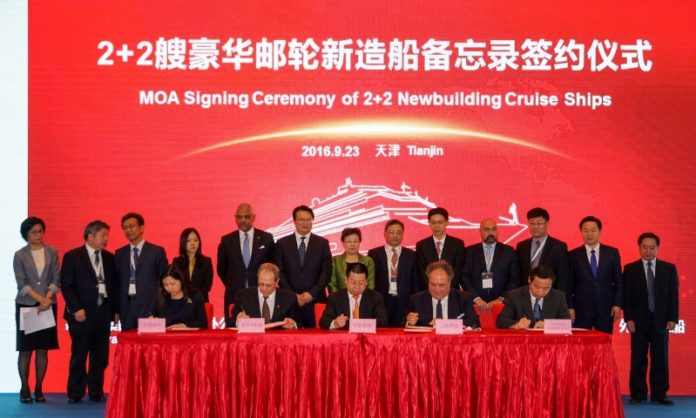 CARNIVAL Corporation’s cruise joint venture in China has signed a non-binding memorandum of agreement (MOA) to order the industry’s first new cruise ships built in China for the Chinese market.

Carnival’s cruise joint venture in China will operate the new ships as part of plans to launch the first multi-ship domestic cruise brand in China, based on Carnival’s Vista-class platform. The first of these ships is expected for delivery in 2022.

Separately, Carnival and its Chinese partners also announced that the Chinese central government has granted approval for the cruise joint venture to officially incorporate in Hong Kong.

“We are excited about the potential for the first new cruise ships to be built and deployed in China for the enjoyment of Chinese travelers, which will be an important milestone in the development of the Chinese cruise market,” said Alan Buckelew, global chief operations officer for Carnival Corporation.

“As we work with our Chinese partners to launch the first domestic Chinese cruise brand in the next few years, being able to offer cruises on China-built cruise ships represents a new opportunity for us to generate excitement and demand for cruising among a broader segment of the Chinese vacation market, which is already the largest in the world and continues to see strong growth every year.”

Buckelew added: “We see this collaboration with CSSC and Fincantieri as a potential cornerstone of a domestic cruise presence in China, serving Chinese guests with world-class cruise ships that are built in China for the first time.”

The MOA is still subject to several conditions including closing of the joint venture, financing and other key terms.