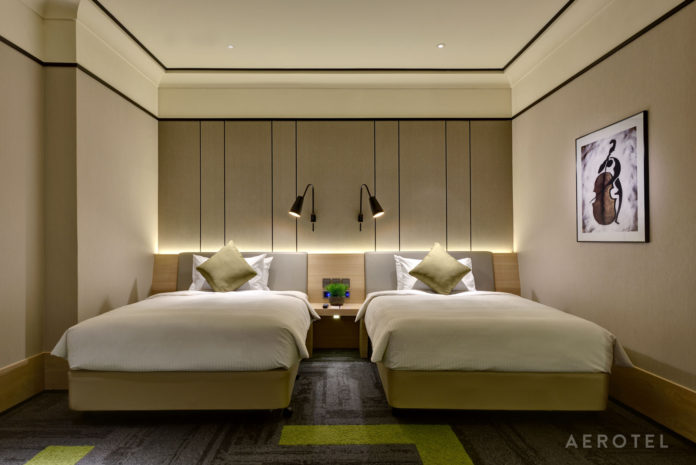 Location
Those with long transits at Changi Airport now have more to look forward to. Aerotel Singapore, located on level three of Terminal 1 above gate D41, officially opened its doors earlier this year and offers a standard of luxury not often associated with transit hotels.

Its location, foremost, is enviably sited in an airport consistently ranked best in the world. This means front-door access to some of the best airport facilities, including complimentary movie screenings, extensive duty-free shopping options, a wide range of F&B outlets and tastings of premium wines and spirits thanks to DFS Group’s collaboration with alcohol distributors the likes of Diageo and Pernod Ricard.

One can easily get lost in transit (in a good way), as I have, in Changi with its dizzying array of amusements. Room
Aerotel Singapore’s rooms range from budget 10m2 single-bedders with shared bathroom facilities to 32m2 fully-equipped family rooms for up to five pax. I stayed in a 25m2 standard twin room that boasted unobstructed views of the airport runway. All rooms seemed equally furnished and come with amenities you would expect from a city hotel of the same category.

I was surprised to find zero noise pollution from the non-stop takeoffs and landings. According to Aerotel staff, this is thanks to the extensive soundproofing done on room walls and windows.

Rooms feature wall-mounted hangers instead of wardrobes. This is done not only to maximise living space, but also to ensure that guests do not store and forget to retrieve belongings in a haste to catch their flight, explained Aerotel Singapore’s country manager Francis Tan.

Facilities
An unlikely but much-welcome facility that Aerotel Singapore has is a swimming pool – the first to be located within the transit area of an airport.

After I noted how busy the pool was, Tan told me many visitors using the pool were non-hotel guests who had opted to pay S$17 (US$12.50) for a three-hour use of the pool and shower facilities. The pool sets Aerotel apart from competitor Ambassador, which operates transit hotels in Terminals 2 and 3. Service
Transit hotels see a high volume of walk-in guests, often lethargic from a long flight and in need of that extra care and attention, which I thought Aerotel succeeded in providing. Even past midnight, front desk staff greeted walk-in guests warmly, assuring them their rooms would be ready as soon as possible.

Do note that many transit hotels, Aerotel included, do not have room service. Still, my request for ice cubes was quickly attended to – I only had to pick them up from the front desk. It helps that rooms are all located nearby and the entire hotel is tucked in its own alcove away from the gaze of the general public.

Verdict
A traveller often needs a place to feel safe and comfortable when in transit miles away from home. Aerotel Singapore not only delivers that in spades but at a reasonable price with plenty of bells and whistles included. There is no reason not to stay here when the situation calls for it.