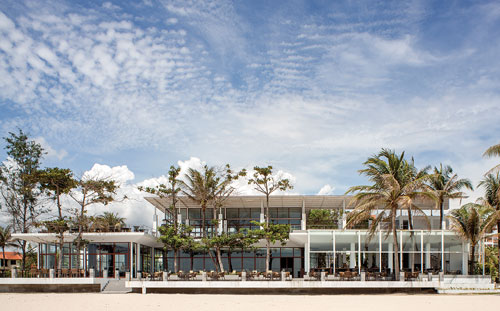 Thanks to two new integrated resorts developments, existing properties in Bintan are also spurred to spruce up their hardware, benefitting the destination’s appeal overall. There was a time when Bintan was better known as a recreational add-on to concrete-jungle Singapore, but the progressive developments of two integrated resorts – Lagoi Bay and Treasure Bay – have expanded the attractions and accommodation selection, raising the island’s allure as a standalone destination.

Treasure Bay’s centrepiece, the Crystal Lagoon is South-east Asia’s first and largest recreational seawater body equivalent in size to 50 Olympic swimming pools. At this man-made lagoon, thrill seekers can swim, wakeboard, kayak and fly nine metres up in the air on a hydro-powered Jetovator, among other activities.

Bintan’s evolving landscape can also be appreciated from the comfort of an ultralight seaplane that takes a scenic route along the northen coast. Operated by the Air Adventures Flying Club, the experience has already earned a strong following among travellers.

The destination’s rich culture and heritage are also being spotlighted through Bintan Resorts Cakrawala Tours’ three new tours – Trail of the Sea Gypsies, Gods & Dragons and Islands of the Kings – led by experienced guides to help visitors understand the destination better.

Bintan Resorts International, which has been marketing these “new discoveries”, has plans to develop even more eye-opening island tours, according to director of marketing Asad Shiraz.

He said: “Very few destinations can stand only on their appeal of having good beaches and golf courses. Bali is not just famous for its beaches, neither is Phuket. Their appeal is strengthened by their ‘localness’, their people, history, and culture.

“Bintan, too, has historical stories to tell. It has religious, cultural and natural features that are unique, significant and attractive. The new tours are designed to showcase these and encourage visitors to explore the rest of Bintan.”

The four-star, 130-key Swiss-Belhotel Lagoi Bay is currently completing its second hotel tower, which will add 27 one- and two-bedroom apartment-style guestrooms and more restaurants to its inventory. The two-year-old hotel recently rolled out an entertainment centre with a 30-seat movie theatre, a games area, a fishing facility on the edge of Lake Lagoi, and a new fleet of jetskis and banana boats.

The Sanchaya, an ultra-luxe colonial estate which has almost single-handedly put Bintan on the global luxury travel map, presents 21 villas and nine suites across 9.6ha of land.

The property has been attracting “a lot of attention” from Russians, the British and Australians, revealed Fay Gauna Lugue, director of sales at The Sanchaya.

“We have had many international celebrities staying with us, as well as a Middle Eastern royal family and its entourage that took our Vanda Villa presidential suite,” she added.

Also, The Canopi features 41 safari tent-suites lining the massive Crystal Lagoon, making it a hit with families, youth travellers and corporate event planners looking for fun in the sun.

Completing the current round-up of new accommodation on the island is Lagoi Bay Villas, which opened in May to feature five one- or two-bedroom villas with plunge pools. Its full inventory of 25 villas will be ready over the next two years.

The upcoming developments have, meanwhile, spurred existing hospitality players on Bintan into revamping their own offerings for a better fight.

Bintan Lagoon Resort has been undergoing an intensive renovation since 2015, starting with a rebranding in July and upgrading its Silk nightclub and Terrace Sports Bar. It also opened the Powerhouse Gym, Jungle Gym for kids and the 650-seat Fiesta housing three micro-restaurants within.

Recreational offerings will be enhanced too, with new and upgraded sports equipment coming online including the guided sunset and sunrise tours on ATVs and Ninebots.

Despite intensifying competition, existing resort chiefs agree that fresh products will help to raise awareness of Bintan. “(They) create a buzz for Bintan and boost tourist arrivals,” remarked Hendrick.

Alpha Eldiansyah, general manager of Banyan Tree Bintan, expects the new attractions to drive weekend arrivals to the island, as well as more repeat visitors and longer stays at his property and Angsana Bintan.

Eldiansyah said Banyan Tree Hotels & Resorts will add a third hotel to its collection in Bintan. Cassia Bintan is a residence-styled hotel with one- and two-bedroom apartments that come with a fully equipped kitchen and living room.

This article was first published in TTG Asia September 2016 issue. To read more, please view our digital edition or click here to subscribe.