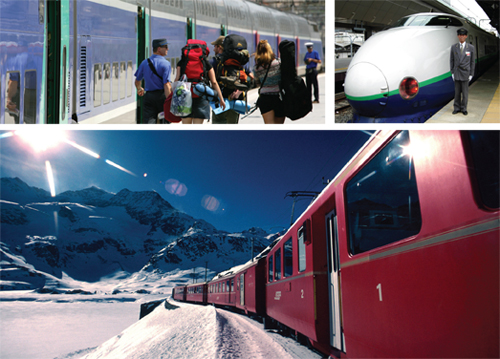 Holidaying by train is gathering steam in Asia MORE Asians are jumping aboard trains for their travels, thanks to improved rail infrastructure, a wider spread of offerings and a growing preference for such land-based journeys.

Global passenger rail travel reached 2.8 trillion kilometres in 2010, of which 73 per cent of journeys were undertaken in Asia-Pacific, based on figures from International Union of Railways.

According to Amadeus’ The Changing Face of Rail Travel study, high-speed rail will be the most common means of business and leisure travel within Europe, and global passengers will increase by 330 million by 2020.

A focus of GDSs
Train ticketing, which has traditionally chugged behind its air and hotel counterparts, has undergone rapid modernisation in recent times as travel technology providers recognise the need to beef up rail content on their booking platforms.

“Around the globe, it’s an exciting time for the rail industry. However, to capitalise on this opportunity, it’s vital that travel (experts) can compare fares and timetables with those of airlines,” said Thomas Drexley, Amadeus director of rail.

Other GDSs are also not lagging behind. In February, Travelport partnered Italy’s first private high-speed rail operator Nuovo Trasporto Viaggiatori to distribute the latter’s content through its Smartpoint App, while a month later, Sabre inked a deal with ACP Rail International that significantly expanded its portfolio to include rail operators in the UK, US, Scandinavia, Australia, Japan and China.

Specialists preferred
Despite the rising availability of rail inventory on GDSs, travel companies that TTG Asia spoke to revealed that they preferred to make direct bookings with rail operators and ticket distributors.

For Boustead Travel, GSA for Eurail in Malaysia, bookings are made directly on a special Rail Europe platform. India’s TMIC also works closely with Rail Europe and receives about five per cent commission for bookings.

Rail ticket distributors are also eager to firm up relationships with travel companies in Asia. In 2011, Rail Europe partnered Hong Kong-based Sincerity Travel – a leading local agency for train travel in Europe – to launch its flagship Asian store in the Chinese SAR. In the same year, the company also set up a new B2B portal for South-east Asia in response to strong demand from its GSA network in the region.

Echoing Rail Europe’s investment in the region is Canada-based train holiday specialist Rocky Mountaineer, which is now seeing “substantial growth” out of Asia, according to Robert Halfpenny, director of sales, Asia-Pacific. While the firm’s South-east Asian sales had always been “modest”, the appointment of Singapore-based Scenic Travel in late 2011 as its regional GSA had pushed up sales volume by 67 per cent to date, he said.

“India has been the focus of our resources over the past two years and with our Delhi-based marketing partner Canada Destination Marketing, we are experiencing a 127 per cent growth in forward 2012 sales year-on-year,” added Halfpenny.

“It’s an exciting time for the rail industry. It’s vital that travel experts can compare fares and timetables with those of airlines.”

Beyond Europe
Asian travel companies are keen to further leverage on the growing interest in locomotive travel among markets here. TMIC, which introduced escorted group tours by rail in Europe last year, saw a 50 per cent year-on-year growth in bookings this year, partly aided by the evolving preferences of the Indian traveller who is “now open to experiment on his own”, said CEO, Srinivas P. Groups are limited to 35 people, making “travelling more enjoyable than on coaches crowded with 49 passengers and one tour manager”, he added.

Economics is also driving bookings for European rail travel. Ann Tan, tour manager of Boustead Travel, which recorded a 50 per cent spike in volume sales of rail packages in 2011, said: “Europe has overtaken Japan and Australia as the top rail destination for Malaysians, partly due to the favourable ringgit-euro exchange rate and the multitude of rail travel options within the continent to suit individual preferences.”

However, travel experts say demand for Asian destinations is also picking up pace.

“Journeys aboard the Eastern & Oriental Express are popular with the Asian market,” said Gary Franklin, managing director, Orient-Express Trains & Cruises. “We’ve seen a significant rise in demand and bookings from the Asian market, led by Singapore and Japan.”

TMIC, too, plans to introduce train packages within India.

For H.I.S. Travel Singapore, sales volume from the country has surged by 200 per cent since 2009 to hit a record of 1,500 packages in 2011, according to branch manager Kaku Imamura. The company will launch itineraries incorporating Tohoku, Shikoku, Chubu and Sanyo this year, adding to its current portfolio of nine types of JR passes.

Andy Jones, office manager of China-based Monkey Shrine, which specialises in Trans-Siberian packages, also noted the acceleration of interest among Asians. From just three per cent in 2008, Asians comprised 10 per cent of its clientele in 2011, mainly from Taiwan, Hong Kong, Malaysia and Singapore.

This article was first published in TTG Asia, July 13, 2012, on page 8. To read more, please view our digital edition or click here to subscribe.