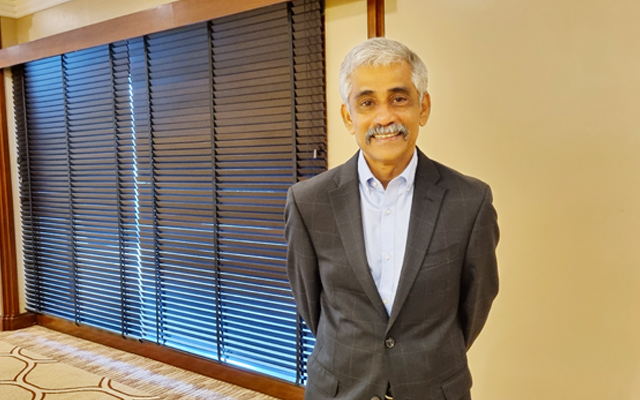 The Association of Asia Pacific Airlines (AAPA) 66th Assembly of Presidents in Bangkok this week has brought optimistic news of continued growth in both international air passenger traffic and capacity.

At a media roundtable this afternoon, Subhas Menon, AAPA director general reported that passenger traffic carried by Asia-Pacific airlines has increased by five-fold to 62 million between January and September when compared to the same period in 2021, capacity has expanded by 125 per cent over the same period, and international passenger load factor has risen by 40 percentage points to average at 70 per cent.

“The travel rebound has been quite stupendous, and is taking place in spite of the worsening economic conditions,” he said, but added that Asia-Pacific’s air recovery still lags behind other regions of the world.

Air traffic here stands at around 40 per cent of 2019 levels compared to other regions that are already approaching 90 per cent.

“Obviously, the main reason is that China hasn’t come to the party yet. And China is a huge market,” reasoned Subhas.

Excluding China, the region’s air travel traffic stands close to 60 per cent of 2019 levels, propped up by major markets like India, South-east Asia and Australia.

Subhas is confident that performance figures for the full year would look even better, as latest data takes in only the first nine months of 2022 and excludes travel demand resulting from the reopening of South Korea, Japan, Taiwan and Hong Kong in October.

Looking into 2023, Subhas maintains optimism based on “robust forward bookings across the globe”, especially driven by business travel, business events and Visit Friends and Relatives tourism.

However, he cautioned that the aviation industry faces many headwinds in its road to recovery, such as constricted fuel supply, rising oil prices, strengthening US dollar due to periodic interest hikes by the Federal Reserve, and increasing cost of business operations.

“At the same time, though, a strengthening US dollar also means that we are likely to import more visitors to Asia,” he said.

Further emphasising the conflicting conditions between the macro environment and state of aviation business, Subhas said: “We are going into recession in a ‘job-full’ market, where unemployment rate is at its lowest and job vacancies are very high. So, people are gainfully employed during the coming recession. However, with interest rates going up, people are generally incentivised to save and that could impact travel.”

When asked to cast his eyes beyond 2023, Subhas said it is “very hard to say how travel demand will hold for the coming years”, and airlines will have to carefully navigate these conditions further down the road.

China: long runway for comeback
In discussions about the return of volume travel market China, Subhas said it has been difficult for airlines to plan their operations to and from the country due to its government’s resolve to stick with its zero-Covid strategy.

When asked if airlines would shift operations and capacity away from current well-performing routes to China when reopening finally happens, Subhas told TTG Asia that such moves were unlikely.

“There will be some balancing of capacity to take advantage of the situation though,” he remarked.

“Right now, you are right, airlines are looking at the low hanging fruits. Some markets have opened up close to six months already. India is a massive market with huge outbound potential, and the travel appetite there has rejuvenated the Indian carriers. So, it makes sense for airlines to continue to tap into these markets that are already at the table (instead of shifting operations heavily to China),” he reasoned.

He added that China’s slow reopening has given the aviation industry time to rebuild operations without intensive demand pressures.

“Nobody has said this, but it is good that China has not opened up at the same time as other destinations while airlines are trying to ramp up capacity. Imagine, China’s return will only exacerbate the situation (of air travel demand outstripping supply),” he opined.