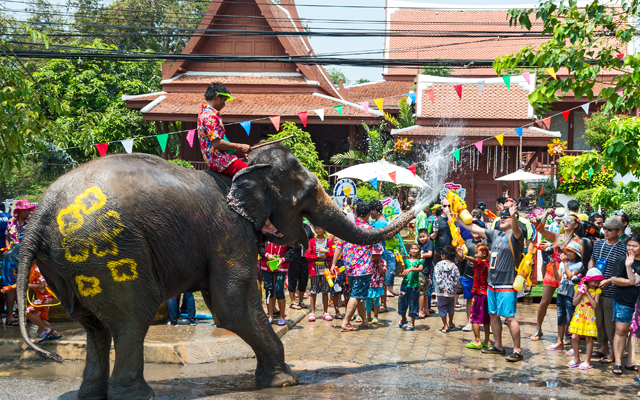 Hoteliers in Thailand have sounded a positive note about bookings ahead of the forthcoming peak Songkran period despite bans on some festive activities due to Covid concerns.

“Revenue for Saii Phi Phi Village is exceeding 2019 numbers with a strong push from the domestic market,” said Jackson Ferguson, vice president of global commerce, S Hotels and Resorts. “Our properties in Samui and Phuket are not performing quite as strong, but the signs are promising.”

Songkran – or Thai New Year – is one of the country’s most active travel periods, especially with domestic tourists. Pre-pandemic, hotels and resorts around the country reported occupancy rates above 90 per cent.

The last two Songkrans, though, have been rather sad affairs. In April 2020, provinces around the nation were in hard lockdown. Last year, the period coincided with the start of Thailand’s third – and most serious – Covid-19 wave.

This year, the government has banned some of the festive activities for which Songkran is renowned. Water fights, powder paint throwing, and alcohol consumption in some zones will be forbidden.

However, the government is intent on declaring Covid endemic by summer, and the widely vaccinated Thai public seems willing to live with the virus despite relatively high case numbers. Therefore, hoteliers are predicting a solid holiday season.

Despite the optimism, Thai tourism industry players have reiterated calls for the country’s government to remove all travel restrictions and ditch its convoluted Test & Go system.

Thailand has dropped the requirement for international travellers to show proof of a negative RT-PCR test within 72 hours of departure. But, with other nations in South-east Asia dropping almost all requirements, many believe that Thailand is self-sabotaging by not following suit immediately.

“The removal of the pre-departure PCR test is a plus,” said Claude Sauter, general manager, The Slate Phuket. “But in my opinion, they should have removed the one on arrival. People might be worried about travelling, testing positive when they arrive and being in lockdown for 10 days. Thailand needs to move faster in removing travel restrictions and scrapping the complicated Test and Go system.”