Macao continues her blitz across big Chinese cities, arriving in Shanghai this June to tantalise Chinese residents with all the best tourism draws she has 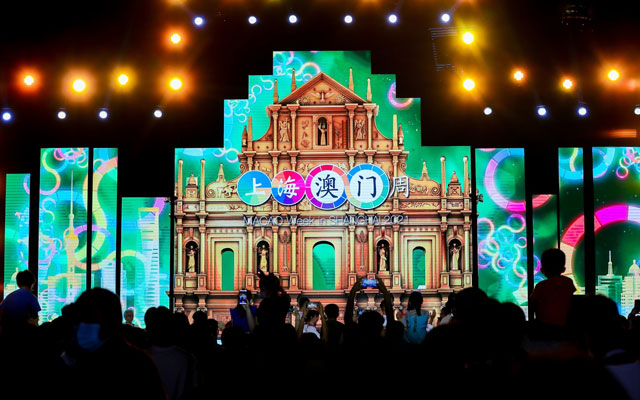 In a big show of all the exciting experiences Macao has to offer, the Macao Government Tourism Office (MGTO) threw a recent mega party along Yuanmingyuan Road Pedestrian Street at Waitanyuan, Huangpu District in Shanghai.

The Macao Week in Shanghai, held from June 3 to 7 this year, brought together 40 different enterprises and businesses to showcase the territory’s tourism, trade and commerce, culture and creativity, sports, entertainment and many more “tourism +” dimensions.

Some 300,000 visitors enjoyed 117 sessions of artistic and cultural performances, such as dragon and lion dances, Portuguese folk dances, and Wing Chun martial arts demonstrations performed by the Inventory of Intangible Cultural Heritage of Macao, as well as fun entertainment provided by the lovable Macao tourism mascot, MAK MAK, along with Macanese singers and music band Tuna Macanese.

Another stunning element in the line-up was a series of mapping shows that were projected on the façade of the Gothic-style Union Church, bringing sights of Macao right before the eyes of Shanghai residents.

To spur Shanghai residents into travel planning, some RMB110 million worth of special travel deals were offered in the form of air tickets, hotel accommodation, dining and other tourism products for sale at the roadshow and supporting platforms during the Macao Week in Shanghai.

Harnessing multiple channels
In support of Macao Week in Shanghai, MGTO utilised various online and offline channels across the mainland. Information was distributed through official accounts on WeChat, Weibo, Xiaohongshu and Douyin, as well as TV, newspapers, travel apps and more.

Sixteen KOLs specialising in travel, lifestyle, culture, gastronomy and other fields conducted 13 livestreams and posted content on the event on different platforms, such as Yizhibo and Trip.com. These livestreams garnered 44.36 million live views and playback throughout the event, while the hashtag #MacaoWeekinShanghai attracted over 40 million pageviews on Weibo.

Alongside the roadshow, Macao’s business events prowess was played up through the Macao Tourism and MICE Presentation Seminar on June 4. Organised by MGTO and the Macao Trade and Investment Promotion Institute, the event connected some 150 delegates from Shanghai and Macao’s tourism and MICE industry.

The success of Macao Week in Shanghai is expected to carry through other major regions and cities in mainland China, with similar destination roadshows planned for Xiamen, Tianjin, Chongqing, Chengdu and Taiyuan.

Visions of Macao
Macao’s presence in the marketplace continues to shine through two major events that kicked off in July.

The 9th Macao International Travel (Industry) Expo took place on July 9 to 11 in a hybrid event format. Supported by the Ministry of Culture and Tourism of the People’s Republic of China, organised by MGTO and coordinated by the Macau Travel Agency Association, the Expo featured five major highlights and “tourism +” elements, and provided a platform for tourism and related business to deepen connections, conduct trade discourse, and identify opportunities for mutual collaboration and growth.

In his welcome address, secretary for economy and finance, Lei Wai Nong, expressed hopes that industry participants could ride on the Expo to explore cooperation opportunities and develop innovative travel products in preparation for the resumption of international travel.

Man Hongwei, secretary of the Bureau Party Committee and inspector at level 1 of the Bureau of International Exchanges and Cooperation of the Ministry of Culture and Tourism, also took the chance to spotlight Macao and Mainland China’s ongoing efforts to rebuild and revitalise tourism exchange.

The in-person component of the Expo was held at The Venetian Macao’s Cotai Expo, occupying 23,000m2 and featuring 708 booths held by 394 exhibitors. Besides 341 buyers from China and across the world, the Expo also welcomed members of the public.

The Expo also marked the launch of MGTO’s Official Flagship Store on Ctrip App, during which an e-commerce workshop was conducted by Trip.com, as well as the debut of the Incubation Plan for Macao’s KOL in Tourism.

Meanwhile, between July and October, Macao will transform into a vibrant gallery and art garden, thanks to Art Macao: Macao International Art Biennale 2021. The international event brings government agencies, enterprises and artists from all over the world to create visual arts under the theme, To Create for Well-being, and to underline Macao’s reputation as a world heritage city. The show features several sections: Main Exhibition, Special Exhibition of Resorts and Hotels, Public Art Exhibition, Creative City Pavilion, Selected Works by Local Artists and Collateral Exhibition, and more.