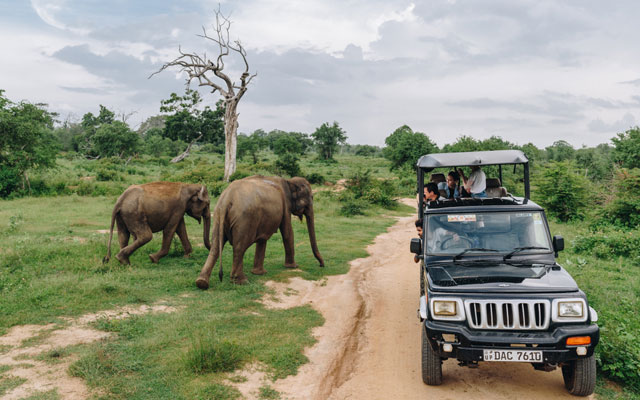 Following a nine-month-long travel ban imposed due to the pandemic, Sri Lanka reopened its borders to international visitors on December 28, with the first arrivals being a group of Ukrainians in a series of charters initially under a pilot project before the country opens fully for commercial travellers.

Under the pilot project, nearly 3,000 tourists from Ukraine will visit the country, coming in batches of around 200 per flight onboard Ukrainian Budget Carrier SkyUp Airlines which is operating flights to Mattala Rajapaksa International Airport, the country’s second international airport located on the southern tip of Sri Lanka.

The 12 flights will operate till January 19, after which the authorities will review the progress of the scheme before deciding when to reopen the borders for visitors from other countries.

The first flight landed on December 28 with 180 passengers, the second the following day with 204 passengers, and the third on January 2 with 172 passengers. The visitors are travelling under a bio-bubble with limited contact with the local community to avoid Covid-19 infections. Five visitors, arriving on the first flight, had tested positive for Covid-19 and were transferred to treatment centres.

Sri Lankan tourism authorities have been pushing to reopen the country to tourism, a key sector in the country’s economy, but the process has been repeatedly delayed in the absence of a go-ahead from health officials.

Tourism minister Prasanna Ranatunga told a local newspaper that stringent measures were being taken to prevent the tourists from coming into contact with the local community. “They travel as a group wherever they go and will not be exposed to any civilians,” he said, adding: “They are always under supervision.”

The charters from Ukraine had been arranged through the business contacts of Udayanga Weeratunga, a former Sri Lankan ambassador to Russia, who is a cousin of prime minister Mahinda Rajapaksa and an influential member of the current administration. Local media have accused the former ambassador of ignoring health protocols by arranging accommodation in hotels, which have not yet been given the Covid-19 certified status by the state’s tourism agency Sri Lanka Tourism Development Authority. Visits to national parks and other places of interest are also allegedly violating health protocols, the local Sunday Times reported.

According to earlier health guidelines issued pursuant to the opening of the Mattala airport for tourism, every tourist must produce a negative Covid-19 report taken 72 hours before arrival. They will also need to take a polymerase chain reaction (PCR) test at the hotel upon check-in, and another PCR test five to six days later if they are staying for over a week.

Tourists will also be required to stay in one resort for one week before being allowed to move to another resort or hotel if their stay extends beyond that period. They will be allowed to move around in restricted areas which have been cleared by the authorities.