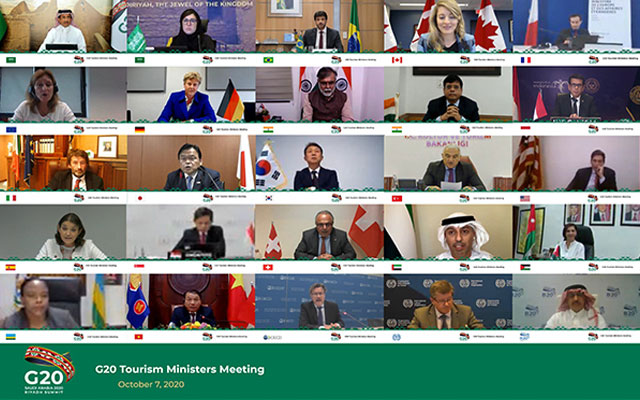 In a historic first, G20 tourism ministers hosted more than 45 CEOs and members of WTTC, who presented their plan to restart international travel and recover the 100 million jobs dependent on it globally.

The plan was unveiled during the G20 Chairmanship of the Tourism Track, at the behest of Saudi Arabia for the global travel and tourism sector to collaborate on developing insights to help accelerate the global recovery.

This was followed by a keynote from Chris Nassetta, president & CEO of Hilton and WTTC chair; and contributions from CEOs and ministers representing all regions of the world, including Argentina, the UK, UAE, Singapore and Spain. They, alongside the private sector, agreed that joint collaboration can accelerate the recovery of travel and tourism.

During the historic forum, WTTC outlined a new 24-point recovery plan which includes twelve points for the private sector and twelve for the public sector, focusing on measures to reactivate international travel.

The unprecedented plan was pulled together with input from WTTC members and covered a wide range of initiatives which hinged on securing international coordination to re-establish effective operations and resume international travel, including the implementation of an international testing regime at departure to minimise the risk of spreading Covid-19.

Gloria Guevara, WTTC president & CEO, said: “This historic meeting provided the best platform to establish public and private collaboration which will lead to rebuilding a sector which has been devastated by the pandemic… The nature of this meeting cannot be underestimated; it is the first time so many travel and tourism CEOs and leaders have been invited to sit in the same forum as G20 tourism ministers to establish a tangible plan to save the travel and tourism sector.

“This plan will have far-reaching consequences; it will bring real and genuine benefits to the industry as a whole – from aviation to tour operators, taxis to hotels, and beyond.

Al Khateeb added: “On behalf of the G20 tourism ministers, I commend the World Travel & Tourism Council and the global travel and tourism sector for their efforts to put people first during the global pandemic, by collaborating at the industry-level and with the public sector to put in place concrete actions that will protect millions of jobs and livelihoods, while ensuring that the sector is more resilient to crises in the future.”

de Juniac said: “It is critical that governments and industry work together to safely reopen borders with systematic Covid-19 testing. Some 46 million jobs are at risk. The historic participation of industry in this G20 Summit is a good start to the government-industry partnership that will be needed to revive the travel and tourism economy on which 10 per cent of global GDP depends.”