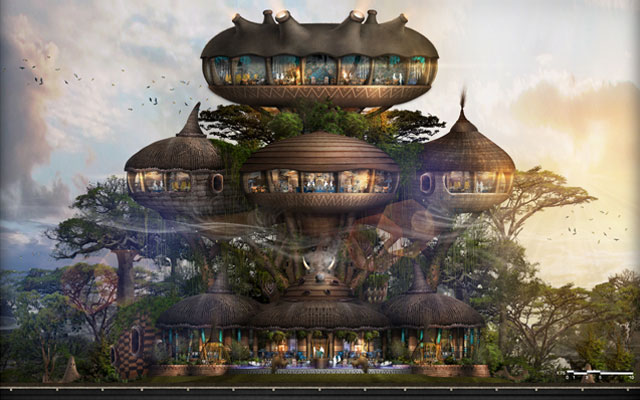 The concept of a zoo will be turned on its head in architect Bill Bensley’s ambitious plan for a luxury hotel cluster nestled in a wildlife sanctuary.

Slated to open in 2022, Worldwild China or more commonly known as The Luxury Human Zoo, will allow rescued endangered animals to roam free in the space while human habitants caged in their hotel rooms watch on.

This Animals First concept will prioritise animal welfare while developing unique conservation conscious learning experience for guests and visitors, according to a press release.

Set in 809ha in Wuchuan in southern China’s Guangdong province, the wildlife sanctuary and reserve will house seven luxury hotels with a combined 2,084 keys. Each of the hotels will also boast a luxury spa.

The idea for a luxury “human zoo” hotel came about when BENSLEY was approached by their client Dinglong in China to design a zoo with over 2,000 hotel rooms on a piece of land bigger than Central Park.

In response, its founder Bensley proposed a wildlife sanctuary and reserve which dedicated 95 per cent of the land for animals to roam freely, and five per cent of the land for people to observe and learn about the animals, while caged in their luxury hotels. Upon completion, the hotel expects to receive up to 10 million guests and visitors annually.

“It is my dream that the mistreated animals of over populated zoos in China could run free there. Of the 60,000 vertebrates worldwide, we are reassigning non-predator animals from less fortunate Chinese roadside zoos to create an ecosystem where they can all thrive,” said Bensley in a press statement.

“I am planning a wildlife reserve without cages or predators, as that simplifies the equations significantly. Instead of fences, we will use natural barriers to separate species which might not get along: barriers such as rivers, mountains, forests or hahas (a recessed landscape design feature that creates a vertical barrier while preserving views).”

In addition, Worldwild will operate four trains which visit all three continents in the reserve. The three luxurious sleeper trains are named the Tasmanian Tiger for Australia, Oriental Expresso for Asia and African Queen for Africa. Following the head conductor wagon, each train will have five cabin wagons with exquisite suites that can accommodate up to 40 guests, a restaurant wagon and an observation wagon.

The fourth train, the Iron Horse, with six wagons, will conduct day tours in all three continents and will wind around the park and take people to eight different whistle-stops. At each stop, passengers will be treated to a Broadway-like show, educating them on different aspects of wildlife, environmental protection and sustainability.