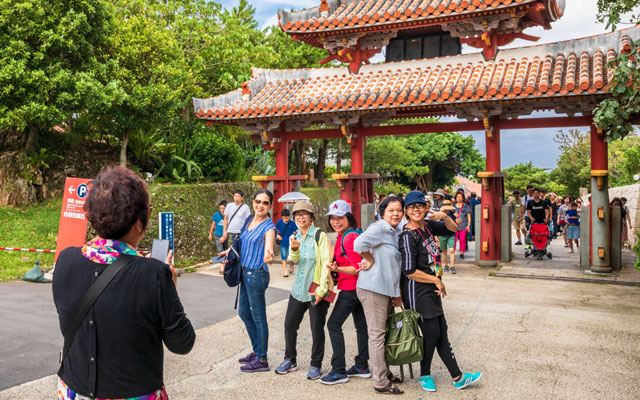 During a meeting with visiting representatives of local tourism, business and financial industries in the prefectural capital, Naha, chief cabinet secretary Yoshihide Suga pledged “large-scale assistance” to help Okinawa “achieve a V-shaped recovery after the virus is contained.”

In recent years, Okinawa had seen a tourism boom, breaking its own tourism records every year for six consecutive years, until last year, according to a report in The Asahi Shimbun.

In fiscal 2018, arrivals reached 10 million, of which three million came from overseas, and tourism revenues hit 734 billion yen (US$$6.8 billion), it added.

The continued surge in visitation, coupled with the expectation of a new runway at Naha Airport that opened last month, prompted a spike in the development of hotels, eateries and other tourism-related businesses in Japan’s southern island prefecture.

However, the ongoing coronavirus pandemic has dealt a devastating blow to Okinawa’s tourism-reliant economy, particularly since the Chinese government’s ban on overseas group travel came into effect in February.

In February, the Okinawan prefectural government recorded only 61,000 foreign tourist arrivals, a fall of 75 per cent year-on-year. Visitor arrivals from mainland China plummeted 99 per cent, while those from South Korea fell by 90 per cent.

The lull is expected to continue in the short term, especially with the suspension of all outbound international flights.

The tourism slump has been keenly felt by industry players. Hotels in Naha and Onna village report that room occupancy for March has dropped to 20 per cent, from 40 to 60 per cent during the same period in previous years.

Yasu Kochi, a MICE coordinator at the Okinawa Convention & Visitors Bureau, told TTG Asia that 17 corporate events scheduled up to July 2020 have been cancelled, while organisers of events slated to take place later in the year are considering their options.

The bureau is assessing the situation facing tourism players to decide what strategy it should put in place to support tourism across the archipelago, she added.