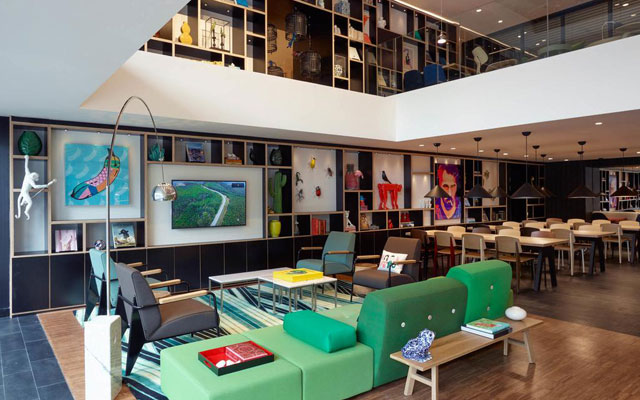 Guests are welcome to linger in the living room – citizenM’s take on a lobby – which features artwork by local artists. A dining space and bar in the same space, named canteenM, is stocked with food items during the day, but transforms into a breakfast station in the morning. There are also three meeting spaces on-site, the largest of which can hold 40 people theatre-style, with two smaller rooms seating up to 14 each. Oakwood Suites Bangkok, Thailand
Located along Sukhumvit Soi 24 in the Phrom Phon district, the building features a total of 232 studios, one- and two-bedroom apartments. Most of the living spaces boast a private balcony with views of the local neighbourhood. All units are also equipped with a well-furnished kitchen featuring top-of-the-line appliances, a Nespresso Coffee maker, and an in-room entertainment system. Avani Central Busan Hotel, South Korea
Avani Central Busan Hotel has opened in the heart of Busan’s financial centre. There are 289 keys across seven categories on offer, where guestrooms feature either city or mountain views. Room amenities include flatscreen TVs, free Wi-Fi, rain showers, and tea and coffee making stations. Facilities on-site include a meeting room, The Lobby Lounge, an all-day dining restaurant serving Korean and international fare, as well as a gym. ibis Styles Bekasi Jatibenin, Indonesia
Located in Bekasi, a city in West Java, is the latest ibis Styles to open in Indonesia. The new-build comprises 185 rooms across three categories, all of which come furnished with a 43-inch LED TV and the signature Sweet Bed by ibis Styles. Amenities on-site include the sTREATs restaurant and a ballroom good for 600 people, alongside recreational facilities such as an outdoor swimming pool, gym, and in-room spa.