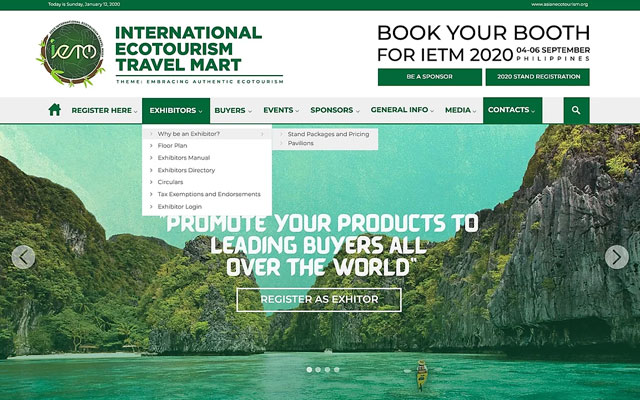 IETM was hatched during last year’s AEN conference in Vietnam when it was noted that despite the many global travel marts and exhibitions for general tourism such as ITB Berlin, World Travel Mart and ASEAN Tourism Forum, there were none for ecotourism.

ISST bagged the hosting as there were no other bidders, its president and founder, and former tourism secretary, Mina Gabor told TTG Asia.

AEN is the regional initiative of Global Ecotourism Network (GEN).

The IETM is slated to be held from August 31 to September 6 at the Philippine International Convention Center Forum, coinciding with 2020 as the year of celebrating biodiversity.

With the theme Enhancing Authentic Ecotourism, IETM will have a strong focus on international ecotourism buyers and sellers, while exhibitors will showcase a strong ecotourism component, green technology and sustainable green practices.

The travel mart will also host an Ecotourism Training course component where 36 speakers and trainers from around the world will tackle wide-ranging topics from disaster risk control and management to climate change and community development.

PATA Philippine Chapter chairman Bob Zozobrado said that as the chosen partner for IETM, they will be campaigning for the participation of local and overseas schools, while details are being finalised in their role in organising tours and accommodations and possibly, transport and transfers.

With a deluge of travel mart cancellations in 1H2020 due to the Covid-19 scare, buyers and sellers are requesting to be accommodated at IETM. Priority will be given to those with a portfolio of adventure, nature and ecotourism, and those primarily in ecotourism areas and destinations, Gabor said.

She added that IETM will be poised to deal with the evolving Covid-19 situation, with a strong emphasis placed on health and safety.

Gabor further shared that the first day of the IETM, which will be open to the public, will showcase the natural environment with demos on jungle survival course, special vegan and drinks preparation, and daily performances in native costumes.

To drum up public awareness, they are working with the Department of Education to run an ecotourism essay competition for students, as well as organising an eco-run along Roxas Boulevard in Manila.

IETM will also showcase the ASEAN Centre for Biodiversity, including major ecotourism sites; four indigenous villages in Indonesia, and the Philippines, among others; as well as four villages in the Pacific islands.