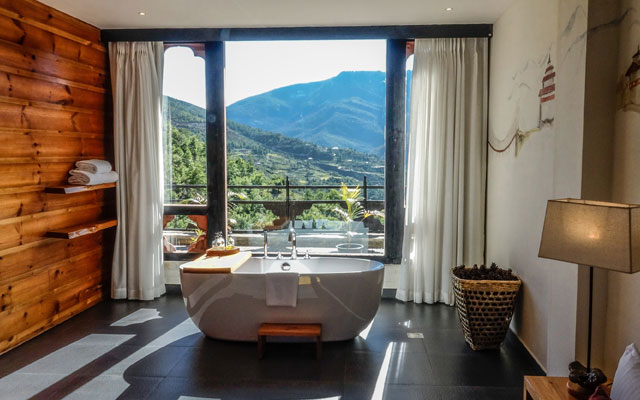 The Standard, Huruvalhi Maldives
Standard International has opened its first Asia-Pacific property in the Maldives, following its London debut. The Standard, Huruvalhi Maldives, nestled between the Raa and Baa Atolls, is home to 115 private pool villas, each featuring its own private lounge deck and plunge pool. Facilities include a spa with nine treatment rooms and a communal hammam; an overwater nightclub; and six F&B offerings ranging from a beachfront BBQ shack to Maldivian cuisine featuring ingredients taken from the island farm. Activities include diving and snorkelling at the house reef, while boat excursions and night fishing can also be arranged. The Postcard Dewa Thimphu, Bhutan
Located a 20-minute drive from Bhutan’s capital city and nestled in a forest is this 15-key mountain hideout. The hotel’s 13 rooms and two suites range from 92m2 to 185m2 – the largest being The Raidak Suite, complete with a private garden, terrace and dining gazebo. Amenities on-site include a restaurant, spa, gym, as well as a temperature-controlled swimming pool. Guests can partake in activities such as yoga, hike to ancient Buddhist temples, tour the numerous sacred sites, or take in the pristine views of the Khasadrapchu Valley and Raidak River. Seda Lio, Philippines
This property stands along a 4km-long stretch of beach within the Lio Tourism Estate in El Nido, Palawan. Rooms start from 45m2 in size, and all 153 rooms feature a balcony. Amenities on-site include a two level infinity pool, children’s playroom and outdoor play area poolside cabanas, gym, spa with eight treatment rooms, and all-day restaurant. Function rooms at the hotel can accommodate up to 300 pax, plus El Nido’s only indoor ballroom that can seat 150 people. Monopoly Mansion by Sirocco, Malaysia
The first Monopoly-themed hotel in the world has opened with 290 guestrooms, spread across 14 storeys, in Kuala Lumpur. Features and subtle hints of the board game and the Great Gatsby era (when the idea for Monopoly came about) will be incorporated into the aesthetics of the hotel. For instance, room keycards have been designed like the property cards from the game. Facilities include a rooftop pool, lounge, several restaurants, gym, spa, kids’ playground, alongside a range of meeting spaces including a pillarless Grand Sky Ballroom. Aerotel Beijing, China
The two-storey hotel is located in the north-east pier of Beijing Daxing International Airport, spanning more than 9,000m2 and offering 215 guestrooms. Other facilities within Aerotel Beijing include a fitness corner, game room with billiard table, and the library lounge/restaurant which offers an international buffet and a la carte menu.

As the flagship property and a first for Aerotel, the hotel also houses two meeting rooms – Xijin House and Jibei House, and VIP room Guji House. Equipped with an audio-visual system, the facilities can accommodate meetings, private dinners and intimate gatherings for up to 36 guests.