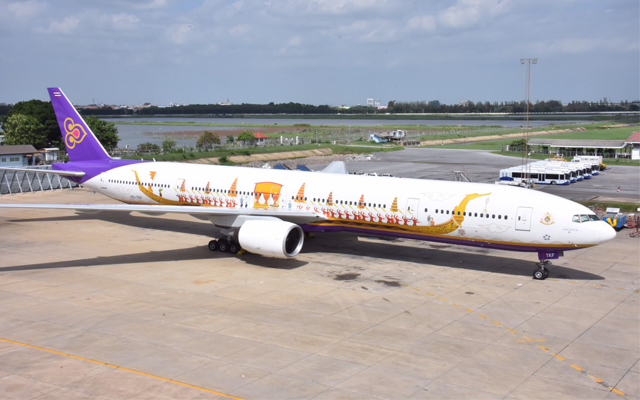 Thai Airways International (THAI) has embellished a Boeing 777-300 aircraft with the Suphannahong Royal Barge livery to commemorate the coronation of Thailand’s new king this year.

THAI’s president Sumeth Damrongchaitham, who presided over a sacred ceremony to bless the aircraft livery, said the effort is an expression of the national carrier’s loyalty and honour to the royal coronation – which was held on May 4, 2019, with celebrations to continue until May 4, 2020.

The airline received permission to paint the Suphannahong Royal Barge aircraft livery on its Boeing 777-300 aircraft, which was royally bestowed the name “Lahan Sai”. The emblem will appear on the aircraft till end 2022.

This special aircraft, equipped with 34 seats in Royal Silk Class and 330 seats in Economy Class, will be operated on round-trip flights from Bangkok-Seoul, Taipei, Beijing, Singapore, Kuala Lumpur and Sapporo.

The current Suphannahong Royal Barge was constructed upon the order of King Rama V, and completed during the reign of King Rama VI.

At the front or bow of the barge is a golden swan figurehead, the body or hull is the body of the swan etched in wood and decorated with gold leaf, mirrors, tassels and engraved glass. The exterior of the barge was painted black, while the interior was painted red, with a throne in the middle of the barge for the monarch or royalty. The Royal Barge is 46.2m long, 3.2m wide, and 15 tons in weight.