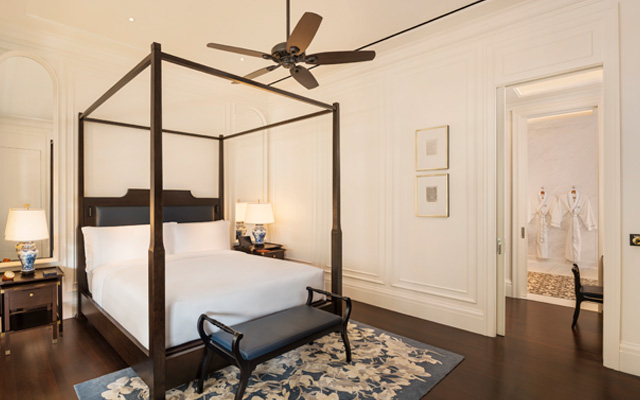 Raffles Hotel Singapore, Singapore
After 2.5 years of restoration work, the iconic property has reopened completely, now offering an all-suite concept. There are 115 keys across nine suite categories, from the lead-in State Room Suites to the Presidential Suites. Recreational facilities on-site include the Raffles Spa, 24-hour gym and a rooftop swimming pool. There are 10 F&B concepts, ranging from the well-known Long Bar and its most famous cocktail, the Singapore Sling; to French restaurant La Dame de Pic by Anne-Sophie Pic of three-Michelin-star Maison Pic in Valence.

The Raffles Arcade has also been newly outfitted with a Raffles Boutique and various retail brands. Event planners may avail any of the seven indoor and outdoor function spaces, where the largest is the Jubilee Ballroom which can hold up to 500 guests cocktail-style. Natra Bintan, Indonesia
Glamping resort Natra Bintan, part of Marriott’s Tribute Portfolio, has opened in Bintan Island, situated within the Chill Cove at Treasure Bay. There are a total of 100 safari-themed tents, each measuring over 40m2 and furnished with a four-poster bed, air-conditioning and an LCD TV, plus an attached garden and outdoor patio. As Natra sits directly on the Crystal Lagoon, guests will be able to swim and enjoy the water activities, from bumper boat-rides to slides and wakeboarding. The site is also home to the Patio restaurant and a al fresco bar lounge.

Minimal Hotel Avenue, Hong Kong
Tang’s Living Group launched Minimal Hotel Avenue as its 15th property and fourth under the Minimal Hotels brand. Located between Jordan and Tsim Sha Tsui, the hotel comprises 51 rooms ranging from 17m2 to 38m2, some of which are interconnected. It was formerly known as Sunny Day Hotel. Amari Pattaya, Thailand
Standing on the northern end of Pattaya Beach is the refurbished Amari Pattaya, where accommodation is now split into two buildings. The Amari Suites offer 49 one- and two-bedroom suites in a separate building from the other 248 guestrooms in the Amari Tower. All-new facilities on the property include free-form swimming pools, waterpark, Treehouse Kids Club, Breeze Spa, fitness centre, and several F&B options such as the Amaya Food Gallery.

The Amari Pattaya also offers refurbished function spaces, and its venue offerings include the newly-built pillar-free ballroom, four additional meeting rooms in Amari Tower, and the Beach Lawn. The property is able to handle meetings, conferences, incentives, and teambuilding activities for group sizes from 10 to 1,000 people. Club Med Joyview Yanqing Beijing, China
Positioned alongside the Beijing Songshan Natural Reserve, the East-meets-West resort offers 307 rooms and suites. Family-friendly facilities include a spa, an indoor waterland, a playground, a kids’ club, and an indoor complex featuring an array of activities ranging from golf and ski simulators to a rock-climbing wall. F&B options on-site include The Marketplace for international cuisine, and Joy Bar offering cocktails and evening entertainment. The resort even has its own winery with a 44ha vineyard capable of producing more than 50,000 bottles of fine wine annually.