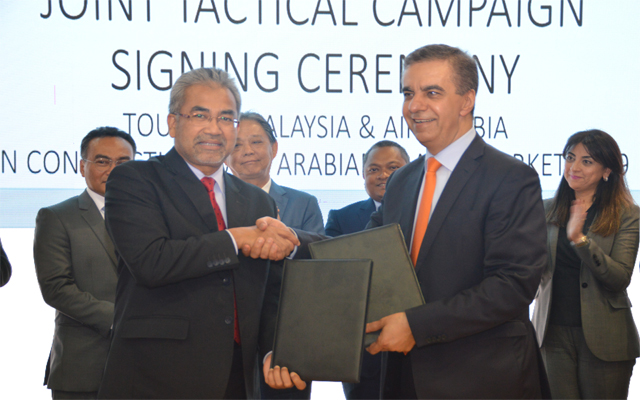 As the Malaysian tourism ministry and Tourism Malaysia make a stronger push in the Middle East, travel trade players who attended the recently concluded Arabian Travel Market (ATM) in Dubai are upbeat about new business from the region’s markets in the coming summer.

Oscar Holidays executive director, Johnson Francis, said: “I met agents from Bahrain, Saudi Arabia and Jordan who showed interest in the destination. I believe business from the Middle East for this summer season will be better than (what we saw in) 2018.” He also received enquiries and keen interest from agents in Georgia and Armenia, new markets for Malaysia.

Moreover, Woon was also upbeat from the strong turnout of outbound agents at a pre-ATM roadshow organised by Tourism Malaysia to Kuwait, Oman and Sharjah. This, he said, indicate “keen interest for the destination”.

Minister for tourism, arts and culture, Mohamaddin Ketapi, witnessed the signing of the Joint Tactical Campaign between Tourism Malaysia, Malaysia Airports and Air Arabia, which will commence daily flights from Sharjah to Kuala Lumpur from July 1.

The minister stated: “We believe this joint promotion will help enhance more tourism traffic from Sharjah, as well as from Iraq, Egypt and other GCC markets.”

Raja Azmi Raja Nazuddin, group CEO of Malaysia Airports, added: “The service will provide travellers flying from or via the UAE to Kuala Lumpur with more options and seats availability. I am confident the launch of this new service will also enhance the image and reputation of Air Arabia as a transportation conduit among air travellers in the region.”

Middle Eastern markets continue to be valued by Malaysian destinations such as the Selangor state. Mohamaddin shared that Tourism Selangor’s promotion of golfing and medical tourism, for example, banked on high yield tourists from the Middle East.

Mohamaddin, who led the Malaysian delegation to ATM, also launched the Arabic version of Tourism Selangor’s Facebook page, which will be used by the state NTO for its promotional campaigns targeted at the Middle East.

The Malaysian delegation to the recently concluded ATM included 87 participants from 61 organisations, both from the government and private sectors with a mission to promote Malaysia and the Visit Malaysia 2020 campaign.

Last year, Malaysia recorded RM3.1 billion (US$747.4 million) in tourist receipts from West Asia, a growth of 32.9 per cent as compared to the previous year.