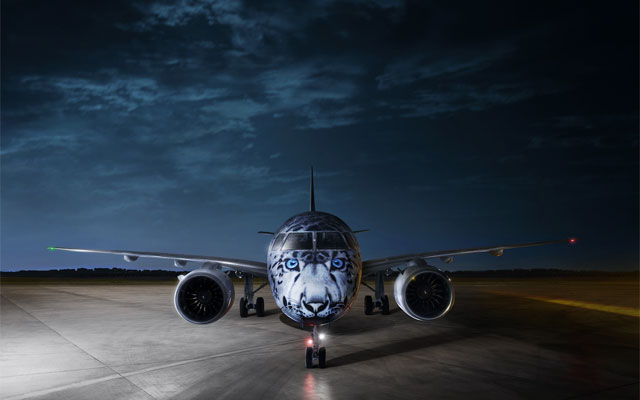 Air Astana yesterday took delivery of its first Embraer E190-E2, which features a special snow leopard livery meant to draw attention to the threat of extinction faced by the wild cat.

The Embraer plane arrived at Nursultan Nazarbayev International airport in Astana clad in the eye-catching livery, which Air Astana says reflects its intention to improve ecological protection for endangered species such as the snow leopard, native to mountain ranges in the Kazkhstan’s south. This is the first of five Embraer E190-E2 aircraft to be delivered to the Kazakhstan airline following an order placed in August 2017.

The new generation aircraft will gradually replace older Embraer E190s in the airline’s fleet. The carrier currently operates nine Embraer E190 aircraft on domestic and low-density regional services, with the first aircraft having entered service in 2011.

The twin engine, single aisle Embraer E190-E2 belongs to the family of upgraded E-Jets, said to offer lower operating costs, emissions and noise levels, with a range of more than 5,000km.