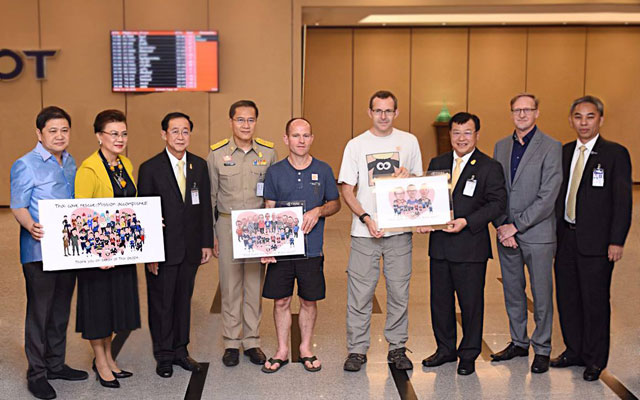 As international rescuers depart Thailand after their heroic 17-day mission at Chiang Rai’s Tham Luang cave, the Thai authorities are showing their appreciation to the foreign volunteers with a raft of rewards, including the prestigious Thailand Elite cards.

The government is offering the heroes a “free-of-charge tourism treat”. For those who are still in Thailand, the Bureau of the Royal Household, the Foreign Ministry and the Tourism Authority of Thailand (TAT) have jointly arranged a sightseeing programme in Bangkok and Chiang Rai.

As for those who have already left, the government is extending an invitation for them to visit Thailand once in five years with the following treats: a business-class return ticket by courtesy of Thai Airways International; a Thailand Elite Card membership with five-year visa-free visits of Thailand and special services at the airport; one-week tour programme with free accommodation.

TAT’s governor Yutthasak Supasorn said in a statement that these treats would bolster Thailand’s image in the international community.

The BBC also reported that the cave complex in Mae Sai district where 12 boys and their football coach were trapped is set to be made into a museum.

According to the article, rescue officials said the museum would showcase how the operation unfolded and expected this would become a key attraction in Thailand.

A film about the rescue is also reportedly in the works.