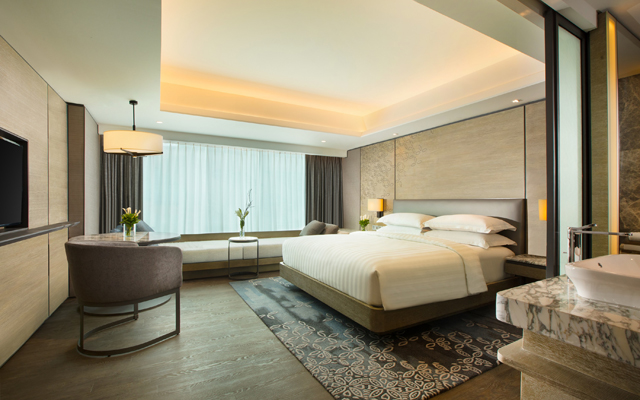 Yogyakarta Marriott Hotel
Yogyakarta Marriott Hotel has opened its doors, giving the city its first Marriott branded hotel. With 347 guestrooms and suites, Yogyakarta Marriott Hotel features what’s said to be the largest club lounge in town; a spa; exercise room; outdoor swimming pool; all-day dining Yogyakarta Kitchen; the Taman Sari Bar & Grill specialty restaurant which looks out to the hotel pool; and a lobby lounge. Meetings and events facilities include a pillarless ballroom, which at 1,870m2 is the largest in Yogyakarta, a boardroom, seven meeting rooms and several pre-function areas. The hotel is located 20 minutes away from Adi Sutjipto International Airport and an hour from UNESCO World Heritage Site The Borobudur Temple. The hotel offers F&B options including at all-day dining venue Feung Fah Restaurant for Thai and international cuisines; Le Bistrot serving Italian-Thai fusion food and featuring a terrace looking out to the Night Bazaar; a lobby bar; a rooftop pool bar; and Sweet House for coffee and pastries. Two multifunctional venues are available on the property, including a ballroom for up to 400 pax. The hotel also houses 720m2 of multi-functional space, including five meeting rooms and a 365m2 banquet hall. F&B options include Garden Grille for Asian and international cuisines; The Noodle Bar; The Garden Lounge; and The Pavilion Pantry, which offers takeaway drinks, snacks and microwaveable meals around the clock. Cordis, Auckland
The Langham, Auckland has been rebranded to Cordis, Auckland, currently in the midst of a complete renovation. Enhancements include the addition of a “Double-Double” category to the hotel’s Superior and Deluxe rooms, which allows guests to opt for two double beds. Suites with kitchenettes will also be introduced to cater to families, independent travellers and long-staying guests.

Also newly refurbished is the 75-seater Lobby Lounge, which now serves up the Cordis High Tea of sweets and pastries complemented with a tea sommelier service, as well as three special Cordis-curated craft beers. Other new features include Handy smart phones all guests; free-to-book eZee electric bikes; and a programme of activities for children under 12. All 411 guestrooms and suites and the lobby will be refurbished by February 2018. For events and meetings, the property offers 1,650m2 of space across four indoor venues. The Da Vinci Ballroom, housed in the lower levels of the atrium, has capacity for up to 500 guests. The outdoor 525m2 Maple Garden can accommodate private parties and product launches. Le Méridien Seoul is approximately 60 minutes by car from Incheon International Airport, and allows for easy access to the COEX Convention and Exhibition Center and the office district in Samsung-dong.