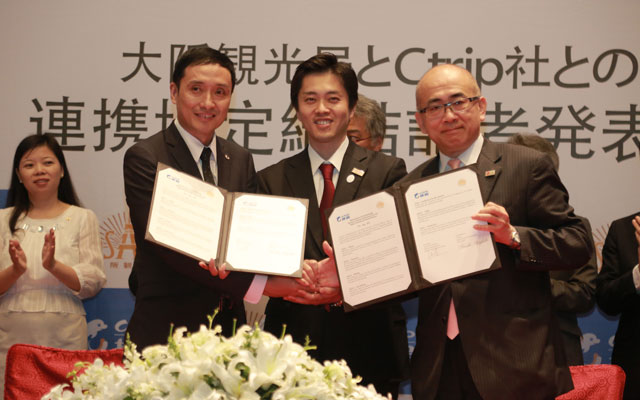 Ctrip and the Osaka Convention & Tourism Bureau have entered into a strategic partnership to cooperate on areas including product development and promotion, big data as well as marketing innovation.

As part of the deal, Osaka Tourism Bureau will issue one- and two-day city travel coupons through Ctrip. The coupons will entitle Chinese tourists to subway rides across Osaka, in addition to admission to popular local attractions. As well, Ctrip users are expected to get more choices of hotels with Miyako Group, Hankyu Hanshin Hotel Group and Keihan Group, among others, which are cooperating with the Chinese OTA to launch exclusive products for its users.

Hiroshi Mizohata, director of Osaka Tourism Bureau, added: “Given that Ctrip is the preferred outbound travel portal for Chinese visitors, we hope to work with Ctrip to attract more Chinese tourists and enhance the visibility of Osaka. There is great potential in the Sino-Japan tourism market.

“At present, China has become the leading client source for Osaka tourism, and Chinese tourists are very important to us,” he added. According to Zhang Rong, Ctrip’s vice president and general manager of hotel business, one fifth of Chinsese tourists to Japan booked their trips through the OTA.